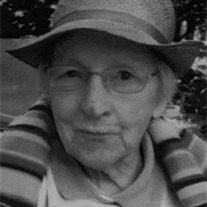 Mineral Point - Gladys Hutchison, age 102, passed away December 16, 2015 at at the age of 102 at Upland Hills Hospice Care, Dodgeville WI. A family graveside interment service for Gladys Cooper Hutchison of Mineral Point, WI will be held on Saturday May 7, 2016 at Wesleyan Chapel Cemetery, Aberdeen, MD, on the anniversary of her birth. Reverend Norman Obenshain is officiating. A graveside interment was held at Graceland Cemetery, Mineral Point, WI on January 6, 2016, officiated by Reverend Gerhardt Miller. She was born May 7, 1913, in Level, Maryland, the eldest child of Ernest L. and Maude Bayless Cooper. She was a first generation Registered Nurse and graduated in 1934 from Maryland General Hospital. She did her practicum nursing in Elizabeth, NJ. and at Sheppard Pratt Hospital Baltimore, MD. Gladys married frequently and with a gusto that brought her to Wisconsin from Baltimore, MD. In 1950 with her twice husband, Francis P. Gorgen of Darlington, WI, her daughter June Cichowicz, and son John Gorgen Clauer. She made Mineral Point her home with her family and proudly opened the Mineral Point Care Center as Director of Nurses in 1972. She resided in the facility for several years prior to her death. Also known as 'Glady', she met and married her late husband Harry Hutchison, of 36 years, in Mineral Point. They traveled frequently to visit his siblings, and attend Jim Beam Bottle Conventions; relocating briefly to Winston Salem, NC. Harry preceded her in death on Thanksgiving Day, 2015. Gladys was an active member of the First United Methodist Church of Mineral Point, serving as church secretary, council member, and seeing her daughter married and grandchildren baptized in the church. In retirement she would be a Methodist service volunteer at the MP Care Center. Gladys enjoyed antiquing, auctions, dancing on "Dairyland Jubilee" dining out at Southwest Wisconsin supper clubs, horsemanship, gardening, hobby farming, home improvement, and more. Her family was fortunate to have her in their lives for so long, and she will be greatly missed by all who knew her. Gladys was affectionately "Happy Bottom" to her son-in-law, Jerry, as she was often the life of the party, happy to dance and kick up her heels at the drop of a hat. Gladys is survived by her daughter, June Cichowicz, CA, and grandchildren: Jaye Maynard, NY, Javin Maynard, AZ, Hutchison stepsons Jim, of MS., and Tom of MD, .and their families, as well as nieces, a nephew, and cousins of the Cooper clan. She was preceded in death by her parents, son; John Clauer, son-in-law; Jerry Maynard, and her brothers Winfield and Terrill Cooper. Memorials may be made to First United Methodist Church, Mineral Point, WI and Upland Hills Hospice.

The family of Gladys Hutchison created this Life Tributes page to make it easy to share your memories.

Send flowers to the Hutchison family.