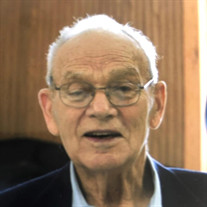 Mineral Point - Gilbert J. Gribble, age 92, of Mineral Point passed away peacefully on Sunday, April 18, 2021. Gib was born on August 27, 1928 the son of Ralph and Emma (Radtke) Gribble. Gib attended Skunk Hollow School and then Mineral Point High School, where he excelled in football, track and baseball. Gib was united in marriage to Mabel Terrill on May 11, 1948. He returned to the family farm and farmed his entire life. He was a member of the Mineral Point Odd Fellow Lodge # 1. Gib is survived by his wife of almost 73 years, Mabel, his daughter Debbie (Ben) Woodbury of Madison, his son Richard (Beth) Gribble of Mineral Point. He is further survived by his grandchildren Stephen Woodbury, Bryan (Becky) Woodbury, Joy (Ken) Foust, Alissa (Alex) Tetzlaff, Karla (Montana Patin) Gribble, Kirk (Leta) Gribble and great grandchildren; Andrew Woodbury, Brett and Cole Tetzlaff, Austin and Blake Foust, Reese and Dane Gribble; a brother and sister-in-law Tom (Sandy) Terrill and many nieces, nephews, relatives and friends. He is preceded in death by his parents, Emma and Ralph Gribble, his brother Gordon, his son Robert Gribble, brother and sister-in-law Lowell (Alice) Terrill and a sister-in-law Sharon Terrill. A Public Visitation will be held from 9:00 a.m. until 11:00 a.m. on Friday, April 23, 2021 at the GORGEN-McGINLEY & AYERS FUNERAL HOME in Dodgeville. Masks and social distancing is required at the funeral home. A Family Memorial Service will be held on Friday, April 23, 2021 at the Gorgen McGinley & Ayers Funeral Home in Dodgeville with an Odd Fellow Lodge Service preceding the funeral. Pastor Leroy Strutt will officiate. Burial will be in Graceland cemetery at a later date. Special thanks to Upland Hills Health and Hospice nurses and staff for their loving care the past couple weeks.

The family of Gilbert James Gribble created this Life Tributes page to make it easy to share your memories.

Send flowers to the Gribble family.