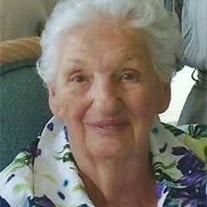 Dodgeville – Geraldine M. "Geri" Peterson, age 88, of Dodgeville, passed away on Tuesday, December 24, 2013 at Agrace HospiceCare in Madison. She was born February 21, 1925 in Dodgeville, a daughter of the late Frank and Pearl (Lawinger) Philipps. She was married to Vincent Peterson, who preceded her in death. Geri worked as a benefits specialist for Iowa County and was active with the Iowa County Commission on Aging. She was an avid golfer, bridge player and bowler. She was a member of St. Joseph's Catholic Church. Geri is survived by her daughter, Patricia J. Maloney, of Madison; her step son, John (Cheryl) Peterson, of Surprise, AZ; her grandson, Richard Darrington; three great grandchildren; her brothers, Jim (Carol) Philipps, of Dodgeville and Paul (Sue) Philipps, of Janesville; further survived by nieces, nephews, other relatives and friends. She was preceded in death by her parents, her husband, her daughter, Geraldine Ann Musch, her brothers, Vincent (Mary) Philipps and Francis Philipps. A Mass of Christian Burial will be celebrated at 12:00 p.m. on Monday, December 30, 2013 at ST. JOSEPH'S CATHOLIC CHURCH in Dodgeville. Father Patrick Wendler will officiate. Burial will be held in St. Joseph's Cemetery. Friends may call from 10:00 a.m. until time of Mass on Monday at the church. The family suggests that memorials be made to St. Joseph's School Trust Fund. A special thank you to the staff at St. Mary's Hospital and Agrace HospiceCare for their love and care of Geri.

Dodgeville &#8211; Geraldine M. "Geri" Peterson, age 88, of Dodgeville, passed away on Tuesday, December 24, 2013 at Agrace HospiceCare in Madison. She was born February 21, 1925 in Dodgeville, a daughter of the late Frank and Pearl (Lawinger)... View Obituary & Service Information

The family of Geraldine M. "Geri" Peterson created this Life Tributes page to make it easy to share your memories.