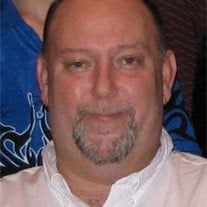 Linden - Gerald (Jerry) Ottoway, age 52, of Linden, formally of Mineral Point, passed away on Thursday, February 6, after a short battle with cancer. Jerry was born on October 30, 1961 in Berlin, WI, to Jerome (Jerry) and Darlene (Bertz) Ottoway. Jerry graduated from Mineral Point High School in 1981. Jerry is survived by his wife, June, and his step-daughters, Sherrie (Chris) Hohler, Mineral Point, and Angel (Josh) Freund, Cedar Rapids, IA; his grandchildren, Dillon Hohler (Shiana Anderson), Jorden Hermanson, Travis and Shane Hohler, Michael and Trinity Hanson and one great-grandchild, Ivan Hohler His family brought him true joy in his life. Jerry is further survived by his siblings, Wayne (Terry) Ottoway, of Allen, TX; Dave Ottoway and Bill (Trish) Ottoway, of Mineral Point, Julie (Kevin) Sincox, of Ridgeway; Robert Ottoway, of Phoenix, AZ; as well as, many nieces, nephews, aunts, uncles and countless friends and classmates. He is preceded in death by his parents; his in-laws, Floyd and Lorrayne Sherman; an infant sister; and all his grandparents. Jerry will be greatly missed by all that knew and loved him. Celebration of Jerry's life will be held after 3:00 p.m. at Mineral Springs Saloon in Mineral Point. Private family services will be held.

The family of Gerald "Jerry" Ottoway created this Life Tributes page to make it easy to share your memories.

Send flowers to the Ottoway family.