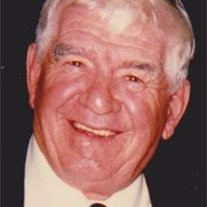 Mineral Point - Gerald W. "Jerry" Cassidy Sr, age 82, of Mineral Point, WI passed away on Monday, August 10, 2015 at William Middleton VA Hospital surrounded by his family. He left this world but not our hearts. He was born in Mineral Point on September 18, 1932, the son of Howard and Vera (Ferrell) Cassidy. He grew up in the Waldwick area. Jerry attended Mineral Point High School, graduating in 1951. He enlisted in the US Navy, was stationed at the Great Lakes Naval Base. He served from 1951 to 1952. He then moved to Freeport, IL and worked at the A&P grocery store. A year later, he returned to the family farm. On January 9, 1954, he married Carole Pilling. They farmed together for more than 45 years. He enjoyed bowling with a 5 year perfect attendance award; playing cards; hunting; and golfing, where he had a hole-in-one, on July 19, 1992 at Dodge-Point Country Club. Jerry was a supervisor of the Waldwick Town Board, a member of the Waldwick Cemetery Association, and also a Waldwick Church Trustee. After retirement, Jerry and Carole enjoyed traveling to Ireland, Alaska, Mexico, Hawaii, Bahamas and many other destinations. Jerry was a proud veteran and member of the Homer and Lee Parkinson Post 170 for the past 63 years. In 2012, he received an American Legion Honorary Life Member Certificate. In May of 2013, he was privileged to go on the Badger Honor Flight. Jerry is survived by his wife of 61 years, Carole; his daughter, Karen (Steve) Oellerich; his son, Jerry Jr. (Julie) Cassidy; his six grandchildren, Tara (Ryan) Huber, Todd (Julia) Oellerich, Theron (Katelyn) Oellerich, Jalissa Cassidy, Jora (Adam Crist) Cassidy and Jeri Jo Cassidy; five great-grandchildren, Cole and Tenlee Huber, Emmerson and Gabe Oellerich, and Jaden Cassidy; and nieces, nephews, relatives and friends. He was preceded in death by his parents, an infant daughter Kathleen, two brothers Vernus and Kenneth. The Cassidy family would like to extend our heartfelt gratitude to the physicians and staff at VA hospital for their kind and compassionate care. Funeral Services will be held at 11:00 a.m. on Friday, August 14, 2015 at the WALDWICK COMMUNITY CHURCH. Burial will be held in the Waldwick Cemetery. A visitation will be held from 4:00 p.m. until 8:00 p.m. on Thursday, August 13, 2015 at the GORGEN FUNERAL HOME in Mineral Point. There will be no visitation prior to the funeral service at the church.

Mineral Point - Gerald W. "Jerry" Cassidy Sr, age 82, of Mineral Point, WI passed away on Monday, August 10, 2015 at William Middleton VA Hospital surrounded by his family. He left this world but not our hearts. He was born in Mineral Point... View Obituary & Service Information

The family of Gerald W. "Jerry" Cassidy created this Life Tributes page to make it easy to share your memories.