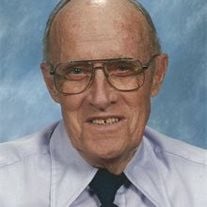 Dodgeville - Gerald D. Fingerson, age 84, of Dodgeville, was called to his heavenly home on Wednesday, December 24, 2014 at Sienna Crest in Dodgeville. His daughter who adored him more than words can say was at his side, along with Charlene Bennett, visiting pastor at Dodgeville United Methodist Church. Gerald was born on February 1, 1930 in Mifflin Township to Henry and T. Mae (Lee) Fingerson. The family moved to Dodgeville just before Gerald reached school age. He attended Dodgeville School District and graduated in 1948 from Dodgeville High School. He cherished his classmates and memories of their time together for the rest of his life. During school, Gerald worked part time at Dodgeville Dairy and upon graduation became the full time local milkman. Gerald served in the U.S. Army during the Korean War and was assigned to medical supply, which meant he went with pilots to take blood and other supplies to the MASH units. He returned home two days before Christmas in 1952 and regained his job at Dodgeville Dairy. He was glad to be home, where he thought life would now be calm. Then on a January night in 1953, Gerald agreed to go on a double date. There he came face to face with Betty McIntosh and it was love at first sight. Gerald proposed in May and they were married on October 10, 1953. In July 22, 1961, a baby girl, Pam, was born and making the family complete. There were no words to describe what a devoted husband and father Gerald was. In 1961, Gerald also became an alderman on the Dodgeville City Council and served over 30 years. Also in 1961, Dodgeville Dairy was bought out and Gerald joined Laverne Leffler in his business, Leffler Plumbing and Heating, and worked there for over 25 years. When that business closed, Gerald went to work for Collins & Hying Plumbing and Heating, where he retired in 1997. Unfortunately, the day after his retirement, Gerald and Betty learned that Betty's cancer had returned. Betty passed away on July 5, 2000 after a courageous fight and Gerald was right by her side. In January, 2012, Gerald had to find different living arrangements and moved Sienna Crest, due to his own health issues. This proved to be one of the best decisions he ever made, as the relationship he had with the staff and other residents was one of the greatest blessings in his life. Gerald was a member of Dodgeville United Methodist Church and the Dodgeville VFW Post No. 7345. Gerald is survived by his daughter, Pam, of Dodgeville; his sisters, Helen Christopher, of Cobb and Gayle (Sherman) Johnson, of Monroe; his brothers, Donald, of Madison, Luther, of Janesville and Merrill, of San Francisco; his sister-in-law, Marie Wenger-Rowe, of Dodgeville; numerous nieces, nephews, other relatives and friends. He was preceded in death by his wife, Betty, his father, Henry in 1934, his mother, Tilda Mae in 1975, his infant sister, Ella, his father-in-law, Ed McIntosh in 1959, his mother-in-law, Mildred McIntosh in 1988, his brothers-in-law, Marvin Christopher, Larry McIntosh and Bob McIntosh, his sisters-in-law, Lillian Fingerson, Sophie Fingerson, Evelyn McIntosh, Doris McIntosh, great niece, Amber Sack. Funeral services will be held at 11:00 a.m. on Tuesday, December 30, 2014 at the DODGEVILLE UNITED METHODIST CHURCH. Rev. Rom Pegram will officiate. Burial will be held in East Side Cemetery with Military Graveside Rites accorded by the Dodgeville Area Veterans. Friends may call from 4:00 p.m. until 7:00 p.m. on Monday at the GORGEN-McGINLEY & AYERS FUNERAL HOME in Dodgeville and from 10:00 a.m. until time of services on Tuesday at the church. The family suggests that memorials be made to the Dodgeville United Methodist Church or to the family. Many thanks to Sienna Crest for their devoted care and to St. Jude Hospice.

Dodgeville - Gerald D. Fingerson, age 84, of Dodgeville, was called to his heavenly home on Wednesday, December 24, 2014 at Sienna Crest in Dodgeville. His daughter who adored him more than words can say was at his side, along with Charlene... View Obituary & Service Information

The family of Gerald D. Fingerson created this Life Tributes page to make it easy to share your memories.

Send flowers to the Fingerson family.