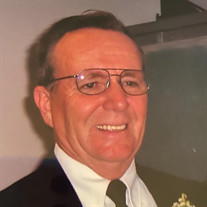 Appleton / Mineral Point - Gerald Allan Stenulson, age 75, of Appleton, formerly of Mineral Point, beloved father and friend too many, passed away peacefully, on Friday, April 16, 2021, after a short battle with cancer. Gerald was born on June 30, 1945 in Dodgeville, WI to Hilman and Isabel (Edwards) Stenulson. He graduated Dodgeville High School in 1963. Jerry was married to Mary E. Graber in 1967 and worked the family farm for many years. While farming, Jerry also drove school bus for the Mineral Point School District. Later in life he drove cement truck, first for Ivey Construction in Mineral Point and later for 4X Concrete in the Fox River Valley area of Wisconsin. In retirement, he also worked briefly for Walmart where he created several close friendships. Jerry lived life every day with flair and loved to share stories of his many experiences. You could always tell Jerry was in the room from his unmistakable laugh. He never met someone who was not a friend and was proud of his ability to engage anyone in conversation. Jerry’s true love was his motorcycles. Over his lifetime, he owned many, but none more precious to him than his Harleys. He loved his ride across the country each year, to visit friends he had made through his years of rally’s, gatherings, and memorial rides. While Jerry loved his travels, his heart never left his hometown, and he shared any experiences he could. He found great joy in introducing staples like pasty and camp breakfast to his friends. Jerry could also give you directions to anywhere in the state of WI by any and every back road possible. Jerry was boisterous, always the life of the party, stubborn as a bull, and never too busy for a friend. He will be dearly missed by his loved ones, remembered for the wonderful man he was, and the lives he touched along his journey. Jerry is survived by his daughters, Jan Chamberlain (Bryan), Michelle Perri (Jeremy), Carolyn Timmerman (Tony), an extra daughter, Samantha Prince, and a stepdaughter, Billie Jo Lewis (Teddy). Grandchildren, Kris and Abby Martin, Tanner, Lilly and Tyson Timmerman, and Christian Perri. A niece Brenda and many other relatives and friends. He is preceded in death by his parents, a brother, Larry, a daughter, Kristine Stenulson, and a stepson, Brad Woodruff. Public visitation will be held from 11:00 a.m. until 1:00 p.m. on Saturday, April 24, 2021 at the GORGEN FUNERAL HOME in Mineral Point. Private Family Services will follow with Pastor Margo Martens officiating. Inurnment will be held in Graceland Cemetery.

Appleton / Mineral Point - Gerald Allan Stenulson, age 75, of Appleton, formerly of Mineral Point, beloved father and friend too many, passed away peacefully, on Friday, April 16, 2021, after a short battle with cancer. Gerald was born on... View Obituary & Service Information

The family of Gerald A. "Jerry" Stenulson created this Life Tributes page to make it easy to share your memories.

Send flowers to the Stenulson family.