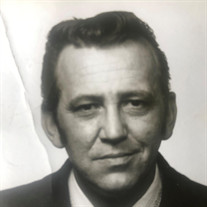 Mineral Point / Columbia, KY - Gary William Ellery, age 81 of Columbia, KY and formerly of Mineral Point, WI passed away peacefully surrounded by his loving family on Wednesday, June 12, 2019 at Agrace HospiceCare in Fitchburg. He was born in Dodgeville on December 28, 1937 the son of John and Charlotte (Sanders) Ellery. He graduated from Mineral Point High School in 1956. He enlisted in the U. S. Army-Air Force as an Air Sergeant in 1957. He married Barbara Jean Douglas on November 2, 1957. Gary worked as a supervisor for Stoughton Muffler and later John Deere retiring in 1986. He later married Margaret Tredinnick. He later purchased a bar and named it Ellery Inn. He was a member of the Beowolf Motorcycle Club. He loved NASCAR, camping, motorcycle riding, traveling, and his trusty dogs "Bandit". Gary is survived by his 4 children; Angela Holmes of South Carolina, Bruce Ellery of Middleton, Kelly (Rusty) Reger of Mineral Point and Susan (Gary) Tomas of Livingston, 14 grandchildren, 23 great-grandchildren, many relatives and friends. He is preceded in death by his parents, ex-wife Barbara Ellery, step-father Jasper Rule, grandson Brett Reger, and son-in-law Stanley Holmes. A visitation will be held on Sunday, June 16, 2019 from 4:00 until 7:00 p.m. at the GORGEN FUNERAL HOME in Mineral Point. Private family services will be held. Military Gravesite Rites will be accorded by the Mineral Point VFW and American Legion Post 170 at Graceland Cemetery on Monday.

The family of Gary William Ellery created this Life Tributes page to make it easy to share your memories.

Send flowers to the Ellery family.