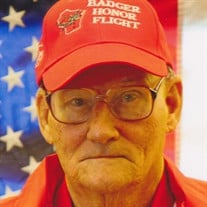 Mineral Point - Fred Henry “Freddy Bear” Loken, age 87, of Mineral Point passed away on Monday, September 3, 2018 at Agrace HospiceCare in Fitchburg. Fred was born on April 2, 1931, to Clara (Seigenthaler) and Curtis Loken in the Fayette Township. Raised on his family farm, Fred spent his youth doing chores, playing sports, and making the memories that built a lifetime of storytelling. As a teen, he proudly played football and baseball for Darlington High School. That pride fueled his dedicated support of youth sports. His radio dial was often tuned to the latest local game. A passion for outdoorsmanship was also born in the years he spent growing up in rural Lafayette County. Fred’s love for hunting and fishing greatly shaped his life. Following High School graduation from Darlington in 1949, Fred joined the United States Navy in 1951. He served in the Korean War on the USS Boxer CVA 21 Attack Carrier with 2 ½ years of overseas service and 2 tours of duty. Fred earned multiple military awards, including the Korean Service Medal with 3 Bronze Stars, a Combat Action Ribbon, the Republic of Korea War Service Medal, the United Nations Service Medal, the Republic of Korean Presidential Unit Citation Medal, the China Service Medal, the National Defense Service Medal, and the Navy Good Conduct Medal. He was honorably discharged from the Navy in 1955, and his military service wove a proud thread throughout his life. He was a lifetime member of both the Veterans of Foreign War Post 7629 and American Legion Post 170. Fred served on the Honor Guard for many years and served as Vice Commander for VFW 7629. During a leave from the Navy, Fred met Ann Burton in Madison, WI, and they were married on June 22, 1954. Ann & Fred celebrated 60 years together prior to her passing in 2014. They raised eight children and farmed most of their lives. Before making the town of Mineral Point their home for the last 25 years, most of their days were spent on a dairy, hog, and crop farm in Waldwick. Fred carried his love of playing sports into adulthood. He played fast pitch softball on many Southwest WI teams as well as baseball for the Home Talent League and the American Legion. In 2012, he was inducted into the Eastman Fast Pitch Hall of Fame. An active member of the Fayette Sportsman Club for many years, he helped raise pheasants, conduct gun safety training, guide youth fishing field trips, and organize the Yellowstone Lake Fisharee. Throughout his life, Fred had a story to share for every occasion. Whether he was playing cards, shooting pool, or having a chat at 5 Points, his ability to entertain knew no bounds. His family cherishes their memories of hilariously competitive Easter egg fights, Fred’s animated renditions of the Happy Birthday song, and how immediately following his own birthday, Fred would quickly declare that he was going on the next. Please remember him as “going on 88.” Fred is survived by his children, Cathleen (Tom) Reynolds of Cherry Valley, IL, Fredric of Mineral Point, Rebecca (Rick) Yasky of Seaford, VA, Steven of Annawa, IL, Jeffrey (Teresa) of Clayton, NC, Tamara (Dan) Engelke of Platteville, and Timothy of Mineral Point; grandchildren, Renae, Jamie, Carlee, Ashley, Samantha, Savaniah, Sabreena, Jeffrey, Alaina, Trevor, Danielle, Rheann, Brandon, and Tommie; and great-grandchildren Kierah, Avayah, Everly, and Greyson; siblings Carol Martin of Darlington, WI; sisters-in-law Darlene Radel of Madison, WI, Mary Burton of Burlington, WI, and Betty (Witold) Launer of Mt. Prospect, IL. Fred was preceded in death by his parents; wife Ann Loken; brothers LaVerne and Robert; sisters Lilian and Glenda; and his son, Mark. The family would like to extend special thanks to Joe VanMatre and Uriah Ottoway for their dedicated friendship and support to Fred in the years since Ann’s passing. Funeral services will be held at 1:00 p.m. on Thursday, September 6, 2018 at the CONGREGATIONAL UNITED CHURCH OF CHRIST in Mineral Point. Burial will be held in Graceland Cemetery in Mineral Point with Military Graveside Rites accorded by the Mineral Point American Legion Post No. 170. Friends may call from 9:00 a.m. until 12:45 p.m. on Thursday at the church In lieu of flowers, the family requests that memorials be made to Mineral Point Rescue Squad, American Legion Post 170, Fayette Sportsman Club, or Iowa County Meals on Wheels.

The family of Fred H. "Freddy Bear" Loken created this Life Tributes page to make it easy to share your memories.

Send flowers to the Loken family.