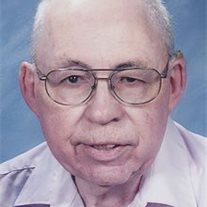 Dodgeville / Mineral Point - Ernest "Ernie" J. Buss entered the world on November 19, 1930, at the family home in Kendall Township, and left on January 14, 2017, surrounded by family in Mineral Point. Daniel "Archie" and Evelyn (Schaaf) Buss welcomed him to the family along with siblings, Mary and Harold. He graduated from Mineral Point High School in 1949 and served in the US Army as a Corporal during the Korean War from 1951 to 1953. In 1974 he married Kathleen Keough at Holy Rosary Catholic Church in Darlington. They were blessed with two sons, William and Patrick. They celebrated 42 years of marriage in August. Ernie worked at Nelson Muffler for 37 years. Ernie is not often found in photos, as he was the one taking them, along with movies. He documented his travels from Korea to Hawaii, to Florida and the National Parks. Besides collecting photos, he collected coins and currency. He bowled and danced, keeping everyone on their toes. He played drums and had learned piano by ear. Ernie is survived by his wife Kathleen; his sons William (Veronica "Vicki" Lawrence) Buss of Shullsburg and Patrick (Denise B Klinkner, MD) Buss of Rochester, MN; grandchildren Spenser, Cody, Tanner, Cooper, Eva, Frances, and Richard; his sister Mary Schwartz of Monroe and many other family and friends. He was preceeded in death by his parents, a brother Harold Buss, and brothers-in-law Glen Schwartz, Larry Keough and Gene Tollakson and nephews Darrel Tollakson and Bradley Tollakson. A Mass of Christian Burial will be held at 11:00 a.m. on Thursday, January 19, 2017 at Ss. MARY & PAUL CATHOLIC CHURCH in Mineral Point. Fr Jim Leeser will officiate. Military Graveside Rites will be accorded by the Mineral Point American Legion Post 170 Homer and Lee Parkinson at St. Paul's Cemetery in Mineral Point. A visitation will be held from 4:00 until 8:00 p.m. on Wednesday, January 18, 2017 at the GORGEN FUNERAL HOME in Mineral Point and from 10:00 until 10:50 a.m. on Thursday at the church. A parish rosary service will be held on Wednesday evening at 7:30 p.m.

The family of Ernest J. "Ernie" Buss created this Life Tributes page to make it easy to share your memories.