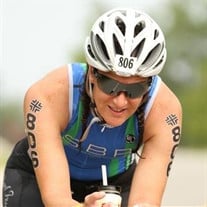 I’m about to do something no parent should ever have to do-write their child’s obituary. My goal is to honor and respect her. Erin Michele Jacobson (Honerbaum) passed away peacefully on Sunday, March 24, 2019 from breast cancer. She was born on Sunday, March 18, 1979. She was greeted by her mom, Kathy, dad, Duane and her three siblings, Stefanie, Peter and Kara. Erin set goals. After her diagnosis of breast cancer in 2016, one of her goals was to reach the age of 40. She reached that goal plus an additional six days. She graduated from Dodgeville High School in 1997 and from University of Wisconsin Madison in 2001 with a Bachelor of Science Degree in Nursing. Erin’s nursing career was adventurous. She first worked in Cardiology in Atlanta, GA then moved to Rush Hospital in Chicago, then a travel contract that took her to San Diego, Phoenix, UW Hospital Madison, Meriter Hospital and Agrace Hospice. After her father Duane’s death in 2005, Erin wanted to be closer to home in Wisconsin so she returned to the UW Hospital ER department. Not one who wanted to miss an opportunity, she then traveled with the UW Group to Ethiopia to assist with medical care there. In 2015, she ultimately settled down with her ER family at Upland Hills Health in Dodgeville, WI. Sadly, Erin had to resign in late summer 2018 due to her health which was a very difficult day for her as her heart was in the ER. When training, Erin would often run through the streets of Dodgeville at dusk. Her route seemed to take her past a certain house, where a certain man would be mowing his yard, or playing with his dog. While it took some time before they connected and talked, they eventually dated and ultimately got married. This man, Marc, had taken Erin to his junior prom many years prior. They dated a bit at that time, until she “dumped me” (Marc’s words). They were married on October 7, 2011 on beautiful Clearwater Beach, FL as dolphins played in the Gulf of Mexico and a rainbow was in the sky- which showed us her dad was there in spirit. Marc had been a wonderful husband; caring, supportive and encouraging throughout this two and a half year “marathon.” It’s wasn’t easy. Marc, you have my love and respect. Erin was an avid Athlete. Her passion began following a marathon she ran with her sister Stefanie, while Erin was in high school. By then the bug had bitten. In her short life, she did the Ironman Wisconsin in 2012 and 2014. She also completed many triathlons, marathons, sprints and relays. She swam, she biked, she ran. As we watched her round a bend in any race we could, she was always smiling. In 2016 Erin met another goal and ran another full marathon in Hawaii. She returned with severe back pain which was thought to be from the stress of the run. Sadly, shortly thereafter she rec’d the Stage IV Breast Cancer diagnosis. Thus, another marathon began. On Thanksgiving Day 2016, one day after her first chemo treatment, Erin and other family members “walked” the Berby Derby in Madison which had been her tradition for many years. Erin’s final relay was shared with her “Breast Friend” Mary Gooze and their Oncologist, Dr. Yamil Arbaje which was a very special day for All. These two cancer patients and their oncologist WON the relay. From the day she was born, travel was a huge part of Erin’s life. Starting with family trips to Clearwater Beach, FL, and branching out from there. Although she visited many places around the world, she always went back to her favorites, Clearwater Beach, FL, Hawaii and Jamaica. She never passed up the opportunity to pack her bags and go. Erin is survived by her loving husband Marc and her dog, Louie, her mom Kathy and her siblings, Stefanie (Frank) Harper-Paul, Peter (Carrie) Honerbaum and Kara Honerbaum. She is further survived by her Mother and Father-In-Law, Dianne and Jerry Jacobson and her Sister and Brother-In-Law, MIchelle and Jeremy Fredrich and her very special nieces and nephews, Elle and Joey Honerbaum, LIbby Honerbam, Aidan Harper and Lauren Fredrich. Erin was preceded in death by her father, Duane Honerbaum and her grandparents, LaVerne and Marcella Crubaugh, Joseph and Marie Honerbaum, Lois (LaVerne) Collins, Thomas Arneson and Stanley and Myrtle Jacobson. She was further preceded in death by Marc’s sister, Kristen Jacobson and Erin and Marc’s special dog, Ziggy. Metastatic Breast Cancer is a terrible disease. Erin was a warrior; a brave courageous woman who was determined every step of this “marathon.” We are so proud of her. A sincere thank you to all who have helped. Dr. Yamil Arbaje and The Dean Specialty Clinic Dodgeville, Upland Hills ER Staff and doctors, Agrace Hospice Care, her very special “F Cancer” group, Mike Gorgen and her Dodgeville Community and beyond who loved and supported her. Also, her family of aunts, uncles and cousins. We, her immediate family will never forget the kindness shown to us. A celebration of her life will be held on Sunday, April 14, 2019 at 1:00 p.m. at Wisconsin Riverside Resort in Spring Green, WI. Life’s journey is not to arrive safely at the grave in a well preserved body, but rather to skid in sideways-totally worn out, shouting, “Holy Cow...What a ride.” My sweet Erin...I’m not sure the dust will ever settle. Love, Mom

I&#8217;m about to do something no parent should ever have to do-write their child&#8217;s obituary. My goal is to honor and respect her. Erin Michele Jacobson (Honerbaum) passed away peacefully on Sunday, March 24, 2019 from breast cancer.... View Obituary & Service Information

The family of Erin Michele Jacobson created this Life Tributes page to make it easy to share your memories.

I’m about to do something no parent should ever have to do-write...