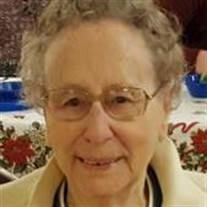 Dodgeville - Eleanor M. Janssen, age 95, of Dodgeville, passed away on June 27, 2019 surrounded by love. She was born on February 6, 1924 in Blanchardville, WI, the daughter of John and Alice (Edelmann) Raess. She graduated from Mineral Point high school in 1942. Along with helping her Dad at his butcher shop, she worked at the County Office responsible for testing milk where she met her future husband. Eleanor married Robert (Bob) Janssen on October 27, 1954 at St. Joseph's Catholic Church in Dodgeville. She raised six children, ran Janssen's Self-Service gas station with Bob, babysat in her home, and later worked at Lands' End in mail processing. Eleanor enjoyed playing cards, doing crossword puzzles, baking, was a member of St. Joseph's Catholic Church and was a loyal and caring friend to many. She loved spending time with her family and her grandkids brought her special joy. Eleanor is survived by her children, Jim (Julie) Janssen of Racine, Joe Janssen of Phoenix, Arizona, Jeanne (Steve) Yenter of Pewaukee, Joan (Ron) Frey of Dodgeville, Julie (Ken) Gensrick of Saukville, Janice (Jeffery) Grayson of Dodgeville; her grandchildren Alison (Zeke) Dasho, Randy (Cassie) Storbeck, Kristine (Bryan) Yenter, Kerric and Kayla Yenter, Payton and Alex Frey, Jason (Alli) Gensrick, Kyle, Lisa, and Michelle Gensrick, Zach Pope and Rachel (Jim) Bridges; four great-grandchildren; her sister Mary Alice Jackson of Wamic, Oregon; sister-in-law Grace Raess of Darlington; several nieces and nephews and other relatives; and devoted friend Evelyn Terrill of Mineral Point. Eleanor was preceded in death by her husband, Bob; her parents; brothers John, Robert, Paul, Robert II; sisters Berta, and Ida Mae. A Mass of Christian Burial will be held at 11:00 am on Tuesday, July 2, 2019 at St. JOSEPH'S CATHOLIC CHURCH in Dodgeville. Interment will be held in St. Joseph's Cemetery. Friends may call from on Monday from 4pm to 7pm at GORGEN-McGINLEY & AYERS FUNERAL HOME in Dodgeville and from 10 am until time of mass on Tuesday at the church. The family wishes to express their sincerest appreciation to CrestRidge Assisted Living and Upland Hills Hospice for the exceptional care Eleanor was given during her stay, as well as the comforting support given to her family. While at CrestRidge, Eleanor enjoyed many special friendships with both the residents and those who cared for her. In lieu of flowers, memorials may be given to Upland Hills Hospice, St. Joseph’s Catholic Church, or to a charity of your choosing.

Dodgeville - Eleanor M. Janssen, age 95, of Dodgeville, passed away on June 27, 2019 surrounded by love. She was born on February 6, 1924 in Blanchardville, WI, the daughter of John and Alice (Edelmann) Raess. She graduated from Mineral Point... View Obituary & Service Information

The family of Eleanor Mary Janssen created this Life Tributes page to make it easy to share your memories.

Send flowers to the Janssen family.