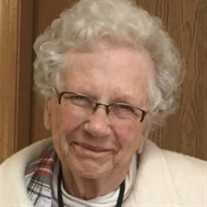 Dodgeville - Eleanor (McGraw) Gevelinger, age 94, of Dodgeville, died on May 11, 2020 at Upland Hills Hospital in Dodgeville, after blessing her family with one last Mother’s Day, A lifelong and beloved local resident, Eleanor was born on December 10, 1925 and grew up on a farm as the youngest of Dan and Mary (Laverty) McGraw’s tightly knit and fiercely proud Irish family of ten children near Mineral Point. She walked to a one-room schoolhouse until fifth grade and helped with the chickens when not playing outdoor games and card games before going on to graduate from Mineral Point High School in 1944. A maverick in her day, after graduating high school Eleanor worked at the Farm Bureau and Farm Loan office and took road trips with her girlfriends, all the while holding at bay her high school sweetheart, Ray Gevelinger, before marrying him nearly ten years later on January 9, 1954. By marrying Ray, Eleanor added his siblings John (Agatha), Joe (Rosemary), Bob (Margaret), Mary (Hadley), Paul, and Ed (Roseanna) Gevelinger to her already large family mix. Eleanor and Ray then settled in Dodgeville, had four children, and continued exploring the country by taking one long road trip after another -- instilling in each of their children the same love of travel and people everywhere that Eleanor and Ray always had. Eleanor’s father, Dan, was born in Ireland and Eleanor never lost touch with her Irish roots, most recently returning to Ireland when she was 79 for another long road trip around the entire country. Unlike the rest of her travel companions, Eleanor was unfazed, and a smile never left her face while being driven down the wrong side of the road on a busy one-way street in downtown Dublin. It took a lot more than that to rattle Eleanor. Eleanor lived for her children, her grandchildren, and her church. A lifelong St. Joseph’s parishioner, she served both on the school board and as a tireless volunteer at St. Joseph’s Catholic School. As busy as she was, she always made time for her many good friends, enjoying her bowling league and the “Bridgers” for many years. And she was always game for a road trip “south,” especially when she won. Eleanor lost Ray in 2012 after 58 years of marriage. A few years later, when she was 90 and after living for 50 years on Vern Court in Dodgeville, Eleanor made a new home in CrestRidge Assisted Living. Eleanor made many friends at CrestRidge, and she was (and her family is) extremely grateful for the hard work and unfailing kindness and companionship that CrestRidge staff showed her in her later years. Eleanor leaves behind her children, Marcia (Don) Bastian, Cindy (Wayne) Pulley, Greg (Julie Lehner-Gevelinger) and Jan (Pat) Davies; her grandchildren Eleana (Gary) and Alex Bastian, Hannah Pulley, Nathan (Nina) and Brehan Gevelinger, and Meghan (Pat), Caitlin (Mike), Lianna and Abby (Jairo) Davies; her great grandchildren Charlotte and James Godfrey and Samuel Gevelinger; her sister-in-law Lois McGraw; many nieces and nephews whom she adored; all the many and special friends she made throughout the years, and everyone at CrestRidge. Her husband, Ray, died before her, as did her sisters Genevieve (Willie) Laverty, Theresa (Willie) Weier, Margaret McGraw, Laura (Bob) Tuschen, Jane (John) Peckham and her brothers Eddie (Lucille), Danny (Dorothy), John (Kay) and Paul McGraw. She also lost a special grandson, Zach (Olivia Hogan) Gevelinger whom she loved very much. Eleanor died peacefully at Upland Hills Hospital on May 11 after a short illness. Her children are so grateful that each was able to spend lots of time with their mom and be by her side at the hospital as she slipped away. In these trying times, a memorial service for everyone else who loved her will be scheduled for a later date. “When Irish Eyes Are Smiling, sure ‘tis like a morn’ in spring. In the lilt of Irish laughter, you can hear the angels sing.”

Dodgeville - Eleanor (McGraw) Gevelinger, age 94, of Dodgeville, died on May 11, 2020 at Upland Hills Hospital in Dodgeville, after blessing her family with one last Mother&#8217;s Day, A lifelong and beloved local resident, Eleanor was born... View Obituary & Service Information

The family of Eleanor Gevelinger created this Life Tributes page to make it easy to share your memories.