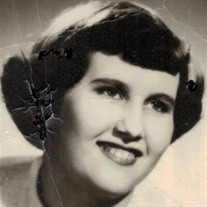 Dodgeville - Patricia Elaine Stonestreet (Mitchell) of Dodgeville passed away on October 22, 2019 after a short illness. Patricia Elaine Mitchell was born September 24, 1937 to James and Katherine Mitchell. She was doted on by her older brothers Jim, Bob and Charlie. She was soon joined by a younger sister, Judy, and her brother Bill. Her eldest sister Rosemary gave her a new playmate with the arrival of her niece, Marsha. Keeping up with her family sparked an independent and spunky spirit. So much so that she declared she was Elaine, not Patricia, thank you very much! While she loved her family and the farm, Elaine craved adventure. After she graduated from Dodgeville High School she was determined to be out on her own. She begged her parents to let her take a job in Milwaukee. They relented and Elaine found herself working in the big city under the watchful eyes of the nuns. But soon, that wasn’t enough. She was invited to visit Rosemary and Marsha in San Diego. Once more, she followed the call, not knowing how her life would change forever. While staying with friends, Elaine decided to go to the movies. Standing in line for tickets, a young sailor told her she was too pretty to pay for her own ticket and paid for her movie. After the show he walked her home and asked if he could take her out the next night. She promptly told him, “I don’t date men with mustaches.” He showed up the next night clean shaven...and never had a mustache again unless he was at sea, as his wife didn’t like it. Life with R.T. “Stoney” Stonestreet was just another series of little adventures. It brought travel, from San Diego to Pensacola finally back to Dodgeville. It meant learning to cook, something she never truly mastered unless it was baking and candies. It also brought challenges with deployments and the Vietnam War. Each year brought a new arrival so that their small family soon became a large one. First came Bill followed by Katherine, then Peg, Jim, Bob and lastly Joe. Together they opened a shoe store and Stoney became a police officer in her hometown. But like most adventures, this leg of the journey would end far sooner than anyone would have liked when Stoney passed away suddenly due to complications from a war wound in 1986. Elaine’s next phase of life saw her children leaving home, and starting families of their own. She was a consistent presence in the lives of her grandchildren and great grandchildren. She enjoyed her work at Bloomfield Manor as the activity director and co-founder of Balloon Fest and volunteering at St. Joe’s school. She traveled parts of the United States, as well, mostly with Peg and Taylor. It also saw her traveling with her sister-in-law Pat to Ireland and Jerusalem. It meant holidays with her siblings, as well as the years marched on. Through all of life's challenges and joys, Elaine never lost her independence, fighting spirit, and her faith even as her story came to an end. Elaine is survived by her children Bill (Sue) Stonestreet, Kathy (Tim) Wubbenhorst; Peg (Will Young) Stonestreet; Jim (Rakhee) Stonestreet; Bob (Monty) Stonestreet and Joe (Lori) Stonestreet; her grandchildren Michael (Mike), Jeremy, Aaron (1979 – 2013), Taylor, Ryan (Jen), Megan, Adam, Jake, Kaitlyn, Lily, C.J., Jake, Andy, Lacy (Jeremy), Scott (Laura); her great-grandchildren Ethan, Elaina, Rylan, Jaxon, Violet, Fallon, Mollie, Kegan, Grayson, Chevy and William; her sister Judy (Delbert) Olson; her brother Bill (Judy) Mitchell; her sister-in-law Jimmie Stonestreet; her niece Marsha (Bernie) Haskins; many nieces and nephews other relatives and friends. A Memorial Mass of Christian Burial will be celebrated at 11:00 a.m. on Tuesday, October 29, 2019 at ST. JOSEPH’S CATHOLIC CHURCH in Dodgeville. Inurnment will be held in St. Joseph’s Cemetery. Friends may call from 4:00 p.m. until 7:00 p.m. on Monday at the GORGEN-McGINLEY & AYERS FUNERAL HOME in Dodgeville, where a Celebration of Elaine will be held at 7:00 p.m. Friends may also call from 10:00 a.m. until 10:45 a.m. on Tuesday at ST. JOSEPH’S CATHOLIC CHURCH, where a Family Eulogy will be said at 10:45 a.m. In lieu of flowers, memorials may be made to St. Joseph’s School Trust Fund or Bloomfield Manor – Balloon Fest Fund. The family would like to thank the staff at Meriter Hospital and Agrace Hospice in Madison and a special thank you to Dr. Diane Anderson.

Dodgeville - Patricia Elaine Stonestreet (Mitchell) of Dodgeville passed away on October 22, 2019 after a short illness. Patricia Elaine Mitchell was born September 24, 1937 to James and Katherine Mitchell. She was doted on by her older brothers... View Obituary & Service Information

The family of Elaine Stonestreet created this Life Tributes page to make it easy to share your memories.

Send flowers to the Stonestreet family.