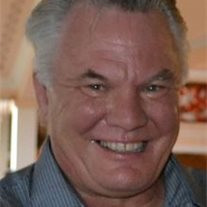 Ridgeway - Edward M. Blum, age 56, of Ridgeway passed away unexpectedly on Thursday, October 3, 2013 while working in North Dakota. He was born on August 28, 1957 to Lawrence and Mavis (Peterson) Blum and raised in Cross Plains, WI with his three siblings. He married the love of his life, Barbara G. Weier on December 11, 1976 and they raised their three wonderful daughters while residing in Ridgeway, WI. Ed was a long haul truck driver for a number of years before becoming the owner/operator of his own company, Fast Times Express. Ed's most recent endeavor was driving his semi on an oil field in North Dakota. He liked to disappear into his shed for hours working on all his toys, most of all his 1971 Chevy Nova. He enjoyed life to the fullest and appreciated spending time with his family and friends- especially his new grandson Jack. Ed is survived by Barb, his wife of 36 years; his three daughters Rebbecca (Don) McKaig, of Ridgeway, Amy (Craig) Jansen, of Nashotah, Rachel (Adam) Graap, of Fitchburg; his grandson, Jack Jansen; his siblings Cliff (Marsha) Blum, of Texas, Linda (Dan) Seay, of South Carolina, Jane (Bob) Cook, of Edgerton; numerous nieces and nephews. Ed was preceded in death by his parents and his best friend Mike "Gulli" Gullickson. A Mass of Christian burial will be celebrated at 11:00 a.m. on Wednesday, October 9, 2013 at ST. BRIDGET'S CATHOLIC CHURCH in Ridgeway. Fr. Sanctus Ibe will officiate. Burial will be held in St. Bridget's Cemetery. Friends may call from 4:00 p.m. until 8:00 p.m. on Tuesday at the GORGEN-McGINLEY & AYERS FUNERAL HOME in Dodgeville and from 10:00 a.m. until time of Mass on Wednesday at the church. Ed left a lasting impression on those that knew him and he will be greatly missed by all.

Ridgeway - Edward M. Blum, age 56, of Ridgeway passed away unexpectedly on Thursday, October 3, 2013 while working in North Dakota. He was born on August 28, 1957 to Lawrence and Mavis (Peterson) Blum and raised in Cross Plains, WI with his... View Obituary & Service Information

The family of Edward M. Blum created this Life Tributes page to make it easy to share your memories.

Send flowers to the Blum family.