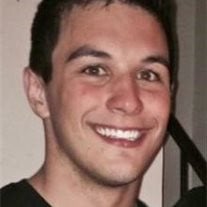 Mineral Point - Collin Steffes, 20, of Mineral Point, WI, died June 24, 2016. He was born July 22, 1995, in Madison, WI, the son of Luke and Jackie (Neidlein) Steffes. He attended the University of Wisconsin-Whitewater as an undergrad, and was currently enrolled at the University of Wisconsin-Milwaukee, majoring in nursing. He was baptized, received his First Communion, and confirmed at St. Mary's Church in Mineral Point. During his teenage years, Collin volunteered and traveled on several mission trips through the Mineral Point Youth Group. He was a member of Mineral Point Troop 337 Boy Scouts of America. He achieved his Eagle Scout Rank upon completion. Collin attended and graduated Mineral Point High School in 2013. During his high school years, he was Vice President of FBLA, involved in the FFA, Forensics, and Editor of the Yearbook Committee. In his free time, Collin spent time deer hunting, boating, water skiing, and horseback riding with friends and family. His positive outlook on life and contagious smile made him someone people felt blessed to know. Collin is survived by his parents Luke and Jackie of Mineral Point, along with his sister Kyla, a senior at Mineral Point High School. He also leaves his grandparents, Donna Steffes, of Mineral Point along with Jean and Judy Reed of Viera, FL, and Christine Neidlein of Stevens Point, WI. Collin will be missed more than words can say by several uncles, aunts, cousins, and many special loved ones, especially Kyle. He is preceded in death by his paternal grandparent, Earnest "Bud" Steffes, and his maternal grandparents, Bill Neidlein, and Don Kidder. A Memorial Mass of Christian Burial will be celebrated at 1:00 p.m. on Friday, July 1, 2016, at Ss. MARY & PAUL CATHOLIC CHURCH, 224 Davis Street, Mineral Point. A visitation will be held from 4:00 p.m. until 8:00 p.m. on Thursday, and from 12:00 p.m. until time of Mass on Friday at Ss. MARY & PAUL CATHOLIC CHURCH. Following the service, the family will be hosting a "Celebration of Life" at Collin's childhood home, 19728 Rock Road, Mineral Point, WI 53565~casual attire suggested. In lieu of flowers the family asks that you consider donations to a scholarship fund and may be sent to Farmers Savings Bank 305 Doty St. Mineral Point, WI 53565. This scholarship will be set up in partnership with Mineral Point High School.

Mineral Point - Collin Steffes, 20, of Mineral Point, WI, died June 24, 2016. He was born July 22, 1995, in Madison, WI, the son of Luke and Jackie (Neidlein) Steffes. He attended the University of Wisconsin-Whitewater as an undergrad, and was... View Obituary & Service Information

The family of Collin E. Steffes created this Life Tributes page to make it easy to share your memories.