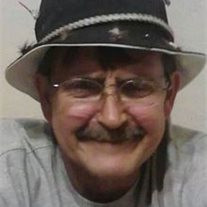 Rewey - Douglas (Doug) Allen Halverson, passed away on Sat. Jan.25, 2014. He was 51. He was born in Dodgeville Wisconsin, to Evelyn (Hildreth) and John Halverson. The youngest in the family, he joined older brother, Michael (Deb) Halverson , and sister Debra (Nate –David Thormann) on August 12,1962. Doug grew up in the Dodgeville area. He worked many years with his father and brother Mike at Joe King Construction Company in Dodgeville. On Oct 21,1989 Doug married the love of his life Beverly (Conner). They moved to the Linden area where he worked at the Linden Cheese factory. Along the way they adopted Tia as their daughter and the family was complete. They then lived a few years in Madison, where he worked at Dean's Clinic in Housekeeping, returning to Mifflin where they have been residing. Doug loved hunting and fishing with his Dad, brother Mike, and brother in law Nate. He always had "open arms" for his nieces, nephews, great nieces and nephews. Doug enjoyed camping and spending time with family and friends. He was always there when anybody needed his help ,and even in death Doug was a giver ,he was a Donor. On the day of his death, Doug was loading the truck up to go ice fishing with his friend Craig Cleary, who found him outside his home, and despite immediate CPR by Pete and Craig and the fast response of The Rewey and Montfort First Responders, Doug could not be saved. A smile on his face ,and a great sense of humor, He will be leaving behind many people that loved him. Doug is presided in death by his parents Evelyn ,and John, his mother and father-in-law, Glenn and Helen Conner, many aunts and uncles ,cousins, nephew ,great nephew,and a great niece. He will be greeted by many loved ones, among them a long time friend, Richard (JR.) Peat. Funeral services will be held at 2:00 p.m. on Thursday, January 30, 2014 at the GORGEN-McGINLEY & AYERS FUNERAL HOME in Dodgeville. Friends may call from 11:00 a.m. until time of services on Thursday at the funeral home. Following the service ,we invite all family and friends to join us at the United Methodist Church, 327 North Iowa Street. Dodgeville for a luncheon, and time to reflect on the good times we shared with Doug. Thank you, The Doug Halverson Family

Rewey - Douglas (Doug) Allen Halverson, passed away on Sat. Jan.25, 2014. He was 51. He was born in Dodgeville Wisconsin, to Evelyn (Hildreth) and John Halverson. The youngest in the family, he joined older brother, Michael (Deb) Halverson... View Obituary & Service Information

The family of Douglas A. Halverson created this Life Tributes page to make it easy to share your memories.

Send flowers to the Halverson family.