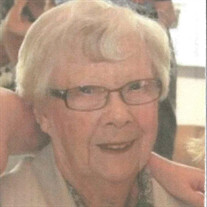 Beloit / Mineral Point - Doris Harris-Studinger-Robb, age 98, passed away on Tuesday, March 24, 2020 at Sun Valley Memory Care facility in Beloit. Doris was born on a farm in Waldwick to parents Will and Ruth Harris on April 25, 1921. Doris attended a country school in Waldwick until moving to Mineral Point where she graduated from Mineral Point high school at the age of 17. After graduating from high school she worked at Saint Joseph’s Hospital in Dodgeville for two years, then moved to Madison where she lived with her mother’s sister Celia. While in Madison she met and married Larry Studinger, they had two children Nancy and Bob. Doris went home to Mineral Point to be with family after the war time death of her brother Donald. While back home Doris decided to separate from her husband Larry and stay in Mineral Point, she then got a job at the Burgess Battery Company. Doris was an avid bowler, a devout church goer and enjoyed taking trips to Madison. She met Harold Robb on a blind date set up by her dear friend and cousin Olive Gratz. They were married In 1957 and moved to Beloit in 1959. Doris worked at McNeany’s department store as a buyer and manager of the cosmetics department. Doris and Harold enjoyed traveling and spending their winters in Lake Placid Florida. Doris is survived by her husband Harold, daughter Nancy (Tom) Klawitter of Madison, daughter-in-law Sue Studinger of Beloit, devoted sister Jean Schaaf (Ralph) of Mineral Point, five grandchildren, nine great grandchildren and many nieces, nephews and cousins. She was preceded in death by her son Bob Studinger in 2018 and great grandson Matthew Studinger in 2019. There will be a memorial service in Mineral Point at a later date. Memorials made on Doris’s behalf can be sent to Sun Valley Homes, 2775 Kadlec Drive, Beloit Wi. 53511.

Beloit / Mineral Point - Doris Harris-Studinger-Robb, age 98, passed away on Tuesday, March 24, 2020 at Sun Valley Memory Care facility in Beloit. Doris was born on a farm in Waldwick to parents Will and Ruth Harris on April 25, 1921. Doris... View Obituary & Service Information

The family of Doris Elaine Robb created this Life Tributes page to make it easy to share your memories.

Send flowers to the Robb family.