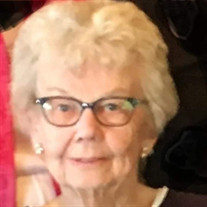 Mineral Point - Doris J. Basting, age 91, of Mineral Point, passed away peacefully on Sunday, May 29, 2022, at Sienna Crest Memory Care in Mineral Point, WI, surrounded by her loving family.  Doris was born on January 23, 1931, to Vincent and Jewelly McDermott.  She attended Mineral Point Schools and graduated in 1949. After graduating, she worked at Burgess Battery in Mineral Point, WI.  Doris (or Mac as Jack referred to her) married the love of her life John (Jack) Basting on September 26, 1953, at St. Paul’s Catholic Church in Mineral Point, WI. They made their home in Mineral Point and raised five children together.  Doris and Jack were involved in the creation of Iowa County ARC in 1966, when they joined with other parents in an effort to provide more community services for those like their son, Mark.  She was proud of her participation in the establishment of the Hodan Center in Mineral Point and served on the original board of directors in 1972. She drove bus for the Hodan Center in the 1970’s and 1980’s as well. As a result of her involvement in bettering and empowering the lives of those disabled, Doris was presented with the Special Recognition award by ARC of Southwestern Wisconsin in 2013. During her later years she worked for Lands’ End as a quality inspector and made many friendships there. Doris was a lifelong member of Ss. Mary and Paul Catholic Church in Mineral Point, WI. Doris was also a very proud member of the American Legion Auxiliary Post 170 and was a lifetime member of the VFW Auxiliary Post 7629 for over 25 years. Doris enjoyed working the many Chicken BBQ’s, marching in the parades and serving veterans in any way she could. Doris was an avid bowler and was a member of the Lady Wendtlandt Crushers.  The team bowled at many tournaments together and being with the ladies brought so much joy to Doris. Her greatest joy however, was watching her children, grandchildren, and great grandchildren as they participated in many events. You could always find Jack and Doris parked at Soldiers Memorial Park watching the games. In 1995, Jack and Doris served as the Grand Marshalls for Homecoming. She also enjoyed taking Sunday Drives with her husband and son, Marky.  Doris is survived by her children, Colleen Weier, Mineral Point, WI; John (Kelly) Basting, Boyd, Texas; Maureen Kolwicz, Mineral Point, WI; Mark Basting, Sunny Side East, Dodgeville, WI: Teresa MacGilvra, Mineral Point, WI; Kent MacGilvra, Mineral Point, WI; Grandchildren, Jason (Kanndie) Basting, Erin (Adam) Weil, Emily and Jackson Basting, Dylan, Valentyna and Trevor MacGilvra; four Great-Grandchildren, Bella and Brooklyn Basting; Lincoln and Griffin Weil. She was preceded in death by her parents; husband, Jack; infant sister, Mary; granddaughter, MacKenzie MacGilvra; and her sisters, Eileen Cooney, Margaret (Don) Schmitz and Rita McDermott.  Doris was a loving daughter, wife, mother, grandmother, great-grandmother, sister, aunt and friend. The McDermott Sisters enjoyed celebrating every Christmas together and they were very proud of their Irish Heritage. Doris will always be remembered for her kind heart and the ability to give freely to anyone in time of need. Mac and Jack loved spending time with all of their family & friends and everyone was always welcome in their home. A Mass of Christian Burial will be celebrated at 11:00 a.m. on Saturday, June 4, 2022, at Ss. MARY & PAUL CATHOLIC CHURCH in Mineral Point. Fr. Michael Tarigopula will officiate. Burial will be held in St. Paul’s Cemetery. Friends may call from 9:30 a.m. – 10:50 a.m. on Saturday, June 4, 2022, at Ss. MARY & PAUL CATHOLIC CHURCH. A luncheon will be served immediately following the burial.

The family of Doris J. Basting created this Life Tributes page to make it easy to share your memories.

Send flowers to the Basting family.