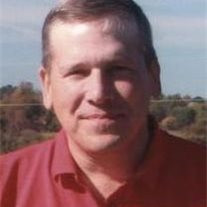 Mineral Point - Donald F. Springer, age 41, of Mineral Point passed away unexpectedly on Sunday, January 29, 2012. He was born in Dodgeville on April 6, 1970, the son of Paul and Donna (Stude) Springer. He graduated from Mineral Point High School in 1988. On October 4, 1997, he married Kristine Lucey at Ss. Mary & Paul Catholic Church in Mineral Point. After High School, he spent seven months in Australia through FFA. He was a high school rodeo supporter and participant. He attended 2 years of Farm Short Course at UW Madison and later at Fennimore Vocational School and became a Master Plumber. Currently he owned Burke and Lovell Plumbing and Heating in Belmont. His passion was hunting and watching the kids show sheep. He was a craftsman of woodworking, painting, drawing and leather. Donald is survived by his children, Bailey, Blaine and Brandon, of Mineral Point; his parents, Paul and Donna Springer, both of Mineral Point; his siblings, Susan (Dean) Judd of Ridgeway, Tracy Durni (Nick Lawinger) of Linden and Angie (J.J.) Ogurek of Bear Creek, WI and nieces, nephews, relatives and friends. He is preceded in death by his grandparents, uncle Chuck and aunt Judith Petrowitz. A Mass of Christian Burial will be held on Wednesday, February 1, 2012 at 11:00 a.m. at Ss. MARY & PAUL CATHOLIC CHURCH in Mineral Point. Father James Hinnen will officiate. Burial will be in St. Mary's Cemetery. A visitation will be held on Tuesday, January 31, 2012 from 4:00 until 8:00 p.m. at the GORGEN FUNERAL HOME in Mineral Point, and on Wednesday from 10:00 - 10:45 a.m. at the church. In lieu of flowers the family suggests memorials to a fund for Donald's children at Farmers Savings Bank in Mineral Point.

The family of Donald F. Springer created this Life Tributes page to make it easy to share your memories.

Send flowers to the Springer family.