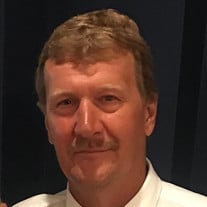 Linden – Donald E. Rickard, age 61, of Linden, died unexpectedly on Tuesday, February 15, 2022 at University Hospital in Madison. Don was born on August 6, 1960 in Dodgeville to Dalen and Geraldine (Faull) Rickard. He graduated from Iowa-Grant High School in 1978. Don was married in 1984 and had four beautiful children, Jennilyn, Dustin, Derek, and Stephani from this marriage. Don met Katrina Hinderman in 1997. She had vowed not to date anyone over 30, and Don thought he was done having children. God had other plans, though. Don and Katrina were married August 12, 2006 and together they welcomed Rachel, Katie, and Grant into the world. They created a beautiful life together that was cut way too short. Don worked the past 38 years at Rule Construction in Dodgeville. He enjoyed his work and his co-workers were like family to him. His co-workers would probably tell you that if you got hit by a dirtball on the job, there was a pretty good chance it was thrown by Don! Don was well known in the Linden community and surrounding area with a strong reputation for being a good man and friend. To know Don was to love him. He was the most easy going, hard working, big hearted, loyal, fix-anything-with-duct tape kind of guy. Don was an incredible family man. He cherished his wife, children, and grandchildren above all else. He also was an avid sports fan. He loved Packer Sundays and time spent with his fantasy football friends. Don will be dearly missed by his wife, Katrina; his children, Jenni (Ryan) Allen and their children Ava, Kya, and Coledon of Cobb; Dustin Rickard of Linden, Derek (Mary) Rickard of Madison, Stephani (Tyler) Staskal and their children Evelyn and Elta of Fennimore, Rachel Rickard, Katie Rickard, and Grant Rickard, all still at home; his siblings, Lonnie (Roger) Klontz of McConnell, IL, Denny (Penny) Rickard of Linden, Kim (Peg) Rickard of Portage, and Tom Rickard of Verona. He is also survived by his father-in-law, Bernard Hinderman (Paulette Friederick) of Lancaster, his mother-in-law, Linda Klaas (Dan Richgels) of Livingston, his sister-in-law, Helen Chapman of Mineral Point, and his brother-in-law, Drew (Cassy) Hinderman of Livingston as well as several nieces and nephews. Don was preceded in death by his parents, Dalen and Geraldine; his brother, Mike Rickard, his sister, Patricia Rickard, and his brother-in-law, Raymond Hinderman. Don was a follower of Christ and attended Life Church in Mount Horeb. While we are devastated by his sudden passing, we take comfort in knowing he is in a much better place now. Funeral Services will be held at 11:00 a.m. on Tuesday, February 22, 2022 at the GORGEN-McGINLEY & AYERS FUNERAL HOME in Dodgeville. Pastor Bob Lee will officiate. Burial will be held in Linden Cemetery. A visitation will be held from 4:00 p.m. until 8:00 p.m. on Monday, February 21, 2022 at the GORGEN-McGINLEY & AYERS FUNERAL HOME in Dodgeville. In lieu of flowers, memorials for Don’s children’s future education would be appreciated.

The family of Donald E. Rickard created this Life Tributes page to make it easy to share your memories.