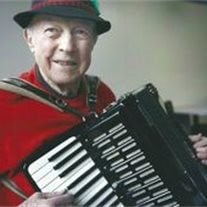 Madison / Ridgeway – Donald F. McDermott (D. Mac Diarmada), age 89, of Madison, formerly of Ridgeway, was called home by his Lord and Savior on Thursday, June 11, 2015 at his home in Madison, while surrounded by his loving family and friends. Donald was born on January 9, 1926 at St. Joseph's Hospital in Dodgeville. He was the only child of Michael James and Mary Ann (Stapleton) McDermott. Don grew up in Ridgeway and, as a boy, he enjoyed spending summers on the family farm, hunting, fishing or roaming the woods with his dog, Rex, who was his faithful companion. Although Don lived for more than 60 years in Madison, his heart and soul always remained at the family farm south of Barneveld. Don graduated from Ridgeway Grade School and then Ridgeway High School in 1944. He worked for Oscar Mayer in Madison for 39 years until his retirement in 1985. Don loved music. He especially loved the music of the accordion and concertina. Over the years he acquired a collection of both instruments. He worked diligently in an attempt to have the accordion become the official state musical instrument of Wisconsin (as of yet, this has not happened). Don was one of the three originators of the former Rudy Burkhalter Memorial Accordion Jamboree, which lasted for 34 years and he played an active role in making this a very successful annual event. Don was an excellent dancer. He enjoyed all styles of ballroom dancing, especially tangos, fast waltzes and fox trots. Don was also an avid reader and self educated person who consistently endeavored to discover the truth behind American and World history and current events. He enjoyed sharing his knowledge and opinions with others. Don was always very proud of his Irish heritage! He was a student of Irish history and language and enjoyed five trips to Ireland, where he made life long friends. He was a former member of the Dane County Shamrock Club and enjoyed its many activities. Don was preceded in death by his parents. He is survived by many relatives and friends, including his very special friend, Mary Leonard, whom he always referred to as his "guardian angel" during his recent illness. A Mass of Christian Burial will be celebrated at 11:00 a.m. on Tuesday, June 16, 2015 at ST. BRIDGET'S CATHOLIC CHURCH in Ridgeway. Father Sanctus Ibe will officiate. Burial will be held in St. Bridget's Cemetery. Friends may call from 9:30 a.m. until time of Mass on Tuesday at the church. In lieu of flowers, memorials may be made to St. Bridget's Catholic Church in Ridgeway or to the Salvation Army. A very special thank you to the many dedicated health care professionals, especially those of you at Dean Congestive Heart Failure Clinic and at Agrace Hospice, for your tender, loving care of Don during his illness. Until we meet again…..

Madison / Ridgeway &#8211; Donald F. McDermott (D. Mac Diarmada), age 89, of Madison, formerly of Ridgeway, was called home by his Lord and Savior on Thursday, June 11, 2015 at his home in Madison, while surrounded by his loving family and friends. Donald... View Obituary & Service Information

The family of Donald F. McDermott created this Life Tributes page to make it easy to share your memories.

Send flowers to the McDermott family.