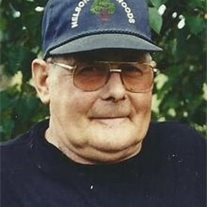 Highland – Donald L. Wenger, age 73, of Highland, passed away on Monday, February 9, 2015 at Bloomfield Healthcare & Rehab Center, after a long battle with COPD, heart problems and cancer. Don was born on May 8, 1941 in Dodgeville, Wisconsin, a son of Oscar and Marie (McIntosh) Wenger. He married Darlene Kreul on October 5,1985. Together they operated a horse farm in the Eden Township. Don worked for many years at Finks Paving of Mount Horeb, until his illness forced him to retire in 1992. He continued selling firewood to the campers of Black Hawk Lake and also started a rabbit business at home and later building furniture until 2014, when he had to give it all up. Don enjoyed raising horses, gardening, going to Lady Luck, playing cards and visiting with people, when they came for firewood, to which he made friends from near and far. He also was a big fan of NASCAR racing, Cubs and Brewers baseball and Packers and Broncos football. He was preceded in death by his father, Oscar, his step father, Dick Rowe, his brother, Warren Wenger, his in-laws, LaVerne and Marjorie Kreul and his brother-in-law, Delbert Kreul. Don is survived by his wife, Darlene Wenger, of Highland; his mother, Marie Wenger-Rowe, of Dodgeville; his siblings, LaVerne (Tina) Wenger, of Virginia, Robert (Diann) Wenger, of Mineral Point, DuWayne (Dorine) Wenger, of Hollandale, Valita Ray (fiance, Terry Tallard), of Ridgeway, Carol (Tom) Gleichauf, of Dodgeville; his brothers and sisters-in-law, Janet Harms, of Dodgeville, Mary DiPiazza (special friend, Ron Eichorst), of Lone Rock, Darrell (Jane) Kreul, of Highland, Melvin (Joanie Haffner) Kreul, of Avoca, Judy (Dan) Butteris, Donnie Kreul (friend, Wendy), both of Dodgeville, Mark (Robin) Kreul, of Mineral Point, Joan (Steve) McGuire, of Highland Joy (Dan) Janas of Twin Lakes, Barb Kreul, of Florida; many nieces, nephews, other relatives, friends and neighbors. A Memorial Service will be held at 6:00 p.m. on Friday, February 13, 2015 at the GORGEN-McGINLEY & AYERS FUNERAL HOME in Dodgeville. Rev. Rom A. Pegram and Pam Fingerson will officiate. Friends may call from 3:00 p.m. until time of services on Friday at the funeral home. In lieu of flowers, the family suggests that memorials be made to St. Jude Hospice, 185 E. Pine Street, Platteville, WI 53818.

Highland &#8211; Donald L. Wenger, age 73, of Highland, passed away on Monday, February 9, 2015 at Bloomfield Healthcare & Rehab Center, after a long battle with COPD, heart problems and cancer. Don was born on May 8, 1941 in Dodgeville, Wisconsin,... View Obituary & Service Information

The family of Donald L. Wenger created this Life Tributes page to make it easy to share your memories.