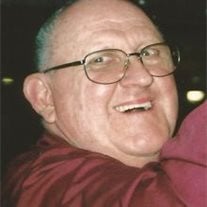 Mineral Point - Donald L. Huxtable, "Hux", age 77, of Mineral Point, passed away unexpectedly Saturday, November 26, 2016 at St. Mary's Hospital in Madison, surrounded by his family. Don was born on January 23, 1939 to Nelson and Viola (Hendrickson) Huxtable. He graduated from Mineral Point High School in 1957. Don married Joan Calvert on January 13, 1962 at The United Church of Christ in Mineral Point and they were blessed with 54 years. Don lived his entire life in Mineral Point where he worked as an auto mechanic. He started out at the Texaco Gas Station with Keith Mitchell. He later worked for J.E. Engels, Gratz Motors and retired in 2006 from Weier Motors. Don enjoyed bowling, stock car races, and harness races. He was the biggest supporter of his children's and grandchildren's activities and sporting events. He is survived by his wife Joan, 4 children David (Sandra) Huxtable of Gleason, WI, Jerry Huxtable, Amy Gerber (Tim Walrack) and Penny (Tim) McConnell, all of Mineral Point; 5 grandchildren Remington (Erica) Huxtable, Robyn (Brandon) Schreiner, Jacob Gerber, Jaylene and Teagan McConnell; 1 very special great grandson Axyl Schreiner; twin sisters Karen Wolf of Madison and Carol (Gene) Potterton of Mineral Point, and many nieces and nephews, relatives and friends. He is preceded in death by his parents, brothers-in-laws Ron Wolf and Bill Trace and nephew Brad Wolf. Funeral Services will be held at 1:00 p.m. on Thursday, December 1, 2016 at the CONGREGATIONAL UNITED CHURCH OF CHRIST in Mineral Point. Rev. Luke Bocher and Rev. Beryl Melcher will co-officiate. Burial will be held in Graceland Cemetery. Friends may call from 4:00 p.m. until 8:00 p.m. on Wednesday at the GORGEN FUNERAL HOME in Mineral Point and from 12:00 p.m. until time of services on Thursday at the church. Memorials may be made to The United Church of Christ, Mineral Point Rescue Squad or the Mineral Point Fire Department.

The family of Donald L. "Hux" Huxtable created this Life Tributes page to make it easy to share your memories.