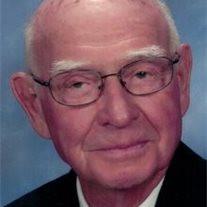 Mineral Point - Donald Mathew Hawkins, age 95, passed away peacefully at Agrace HospiceCare on Wednesday March 29, 2017. He was born on October 15, 1921 on the family farm in Hammond, WI, the second of Matt and Elva (Keating) Hawkins' six children. He graduated from Hammond High School in 1939 and began attending UW – River Falls. He served as a First Lieutenant in the US Army during WWII from 1942 to 1946. After the war he returned to River Falls, graduating in 1947 with a degree in agricultural education. He later continued his education, earning a Master's Degree in agricultural education from UW – Madison in 1968. He taught vocational agriculture at Arena High School from 1947 to 1951, and at Mineral Point High School from 1951 to 1983. In 1952, Theresa O'Connor of Blue River began teaching at Mineral Point High School. Don and Theresa (Tess) were married in 1953. He was actively involved with the Iowa County Fair, serving as President of the Fair Board for many years, and was a member of the Kiwanis Club. He also served as the chair of the fund raising committee for the Mineral Point Library remodeling project, and after his retirement from teaching, he served two terms on the Mineral Point School Board. He was a member of St. Mary's and St. Paul's Catholic Church. In his retirement years he traveled extensively throughout the United States, also visiting Cuba, Europe, Australia and New Zealand, South America, and south east Asia. Also in retirement, he was actively involved in a prairie restoration effort at Bloomfield Hills near Dodgeville and two oak savanna restorations in Mineral Point (adjacent to elementary and high schools) where he especially enjoyed collaborating with third grade and high school students. In recognition of his efforts, he received the Rod Nilsestuen Award for working lands preservation from the Wisconsin Alliance for Land Trusts in 2015. He is survived by daughter Geralyn Hawkins, Fitchburg, WI and son Timothy (Lynn) of Whitefish Bay, WI, two granddaughters, Meghan and Michelle Hawkins, two siblings, Mary (Chuck) Parker and Lory (Marlys) Hawkins, as well as many nieces, nephews, other relatives, friends and former students. He was preceded in death by his wife Theresa and granddaughter Kelsey Hawkins, his sister Catherine (Marlen) Land, and two brothers Jim (Dolores) Hawkins and Tom Hawkins. A Mass of Christian Burial will be celebrated at 11:00 a.m. on Monday, April 3, 2017 at Ss. MARY & PAUL CATHOLIC CHURCH in Mineral Point. Monsignor Daniel Ganshert will officiate. Burial will be held in St. Mary's Cemetery with Military Graveside Rites accorded by the Mineral Point VFW and American Legion. Friends may call from 2:00 p.m. until 6:00 p.m. on Sunday at the GORGEN FUNERAL HOME in Mineral Point and also from 10:00 a.m. until 10:50 a.m. on Monday at the church. A rosary service will be held at 6:00 p.m. on Sunday at the funeral home. In lieu of flowers, the family suggests memorial contributions to the Mineral Point chapter of the FFA Alumni, the Mineral Point Library or St. Mary's and St. Paul's church. Or consider an alternative memorial: teaching a child a skill, becoming involved in a community organization, or planting native plants in your yard.

The family of Donald M. Hawkins created this Life Tributes page to make it easy to share your memories.

Send flowers to the Hawkins family.