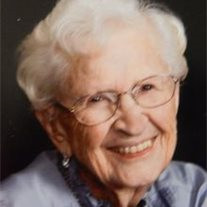 Dodgeville - Dollie Iola Roh , age 95, of Dodgeville, passed away on January 11, 2016 at Upland Hills surrounded by her family after a brief illness. Dollie was born on April 3, 1920 in Clifton Township, the daughter of George and Frances Wisdom. She was united in marriage on September 20, 1941 to Edward Roh at St Bernard's Catholic Church in Madison, WI. Following her marriage, she farmed alongside her husband for two years in Bear Valley, then moved to the Dodgeville area in 1944 where they farmed until 1977 at which time her husband retired and they moved into Dodgeville. Dollie was a member of St. Joseph's Catholic Church in Dodgeville. She was also a member in the Iowa County Extension Homemakers Club, National Farmer's Organization and the local ARC. Dollie was dedicated to helping mentally challenged individuals live productive lives. She advocated for and was instrumental in starting a group home for the developmentally disabled in Dodgeville where her son, John, lived for a short while. She was so pleased when the Hodan Center in Mineral Point opened which provided a much-needed and well deserved support system for special needs' individuals in the surrounding area. She was devoted to her children, teaching them many life lessons, especially kindness and generosity, as well as providing a sense of spirituality and a strong work ethic. She was known for her Sunday chicken dinners, her homemade chicken noodle soup as well as her potato dumplings. No one ever left her house with an empty stomach. Chocolate chip cookies were her favorite and she spent many hours baking for family and friends. Holidays and reunions were a highlight of her life as it was a time of fun and laughter and just being together with her family. Many car rides throughout the countryside on Sunday afternoons were a favorite that would end with an ice cream cone or A&W root beer. She is survived by her children: Ruth (Chuck) Werkowski of West Allis, Jane (Alan) Bruns of Janesville, Doug of Dodgeville, Kay (John) Edler of Park Ridge, IL, Mary Kenny of Sun Prairie, Janelle Urben of Oregon, Marlene (Doug) Reeson of Barneveld, Julie (John) Meyer of Greenfield, Lisa Lynch of Madison, and John of Lancaster. She is also survived by 26 grandchildren, 38 great-grandchildren and 5 great-great-grandchildren. She was preceded in death by her husband Ed; one son Gary; son-in-law Michael Kenny; daughter-in-law Janice Roh, and three grandchildren (Katie Urben, Greg Bruns and Steve Domaszewicz); parents (George and Frances Wisdom); five sisters (Carol, Ina Wood, Betty Gibbs, Lila, Evelyn Ferris); one brother (Lyle). A Mass of Christian Burial will be celebrated at 11:00 a.m. on Saturday, January 16, 2016 at ST. JOSEPH'S CATHOLIC CHURCH in Dodgeville. Friends may call from 9:00 a.m. until 10:45 a.m. on Saturday at the church. Private burial will be in St. Joseph's Cemetery at a later date. In lieu of flowers, memorials may be made to The Hodan Center in Mineral Point. The family would like to give special thanks to Dr. Shannon Reed and Dr. Gordon Grieshaber and all the staff at Upland Hills Hospital for the amazing care and support given to Dollie and her family throughout her stay. Thank you to the many friends and neighbors who have provided their friendship as well as many visits throughout the years. Dollie cherished your time spent together.

Dodgeville - Dollie Iola Roh , age 95, of Dodgeville, passed away on January 11, 2016 at Upland Hills surrounded by her family after a brief illness. Dollie was born on April 3, 1920 in Clifton Township, the daughter of George and Frances... View Obituary & Service Information

The family of Dollie I. Roh created this Life Tributes page to make it easy to share your memories.

Send flowers to the I. family.