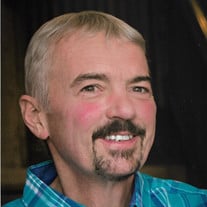 Mineral Point - Dennis L. Ray, 58, a man who was “happy every day ‘he woke’ up”, succumbed to cancer (mesothelioma) on Monday, October 14th, 2019, surrounded by family, in the comfort of his home. Dennis was born on February 11, 1961 to David and Sharon (Douglas) Ray. He married his best friend and “Angel”, Brenda (Kitelinger) on May 28, 1982 and renewed his vows on May 28, 2014. The self-proclaimed “Original American Picker” had a shared passion for antiques along with his father. Dennis was a proud member of Laborers’ International Union/Laborers’ Local 464. He enjoyed Harley rides with his boys, watching sports, hunting and spending Friday nights at supper clubs. Dennis was known for starting each morning off with a ‘cup of Joe’ at the Graber farm followed by keeping tabs on the town while driving up and down the streets of Mineral Point, sometimes while managing a tractor-drawn hayride. There wasn’t a person he wouldn’t stop and talk to as he enjoyed starting conversations and meeting new people. If you could partake in his back-and-forth banter, you knew Dennis liked you. Dennis is survived by the love of his life, Brenda; his children, Ben, Nikki (Mitch), Mike (Kat), Katy (Jeremy) and his 8 grandchildren, Tayden, Tucker, Tanner, Jaycee, Aurora, Kaylee, Navaia and Carson. He is also survived by his mother, Sharon; his siblings Sherry, Duane (Pam) and Rina (Thad); his grandma, Avis; his mother-in-law, Sally; his brothers-in-law Dan (Cindy), Randy (Jody), Jim (Amy), Joe (Kim), Jason (Kim); his sister-in-law Kathy (John); his daughter-in-law, Alicia; his 4-legged friends, Suzy and Charlee; and many special nieces, nephews, aunts, uncles and dear friends. Dennis will be reunited in heaven with his father, David; his siblings, Robin and Carolyn; his father-in-law, Ed and his brother-in-law, David. A Memorial Service will be held at 11:00 a.m. on Saturday, October 19, 2019 at GORGEN MCGINLEY & AYERS FUNERAL HOME in Dodgeville. Pastor Beryl Melcher will officiate. Burial will be in St. Mary’s Cemetery. Friends may call from 4:00 pm. until 8:00 p.m. on Friday, October 18, 2019 and on Saturday from 10:00 until 10:50 a.m. at the Gorgen McGinley & Ayers Funeral Home. A luncheon will follow the burial at the Mineral Point VFW and American Legion Hall. The family would like to extend a special thanks to the Agrace hospice caretakers, Tammy Rule and Jessica Jerry, for their around-the-clock healing hands and to his special niece, Cory Bennett, for her abundance of love, patience and kindness not only with Dennis during his illness, but with all of us during the most difficult days. Dennis made great strides in his personal life. We all have regrets for one thing or another. The difference is, Dennis owned up to and acknowledged those mistakes. For that, he became the bigger person. He claimed his power and decided who he was going to be when the world challenged him. He changed. Although he was battling a sickness, he never ceased to put other’s needs before his own. His love for family and friends was undeniable, unconditional and never-ending. Without a doubt, Dennis’ most cherished memories were made at home, with family – Ben, the spitting image of his father; Nikki, the reliable rock and strength of the family; Mike, the ‘good-time Charlie’ whose laugh lights up any room; Katy, she might be late for the party, but she brings a heart of gold with her and then of course, Brenda Lou… Happiness is being married to your best friend.

The family of Dennis Lee Ray created this Life Tributes page to make it easy to share your memories.

Send flowers to the Ray family.