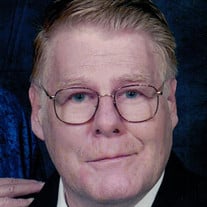 Dodgeville - Dennis Lee McGauley, age 77, died on Friday, June 12, 2020, at Upland Hills Hospital, after a brief illness. Dennis was born in San Mateo, CA. He was the youngest of two children born to William James McGauley and Mattie Lee Copper. He was raised in San Mateo, CA. Dennis graduated from high school in 1960. In 1964, while attending college, he was drafted into the United States Army and served in Army Intelligence until 1966. In 1968, after returning to California, he met Beverly Ann McComish, who he married on August 31,1986 at our Lady of Hope Catholic Church in Seymour, Wisconsin. They later returned to California where they had their first son, Kevin. After their son's birth, they relocated to Wisconsin, where sons Michael and Terry were born. Dennis and Bev continued to live in Dodgeville after that time. Dennis worked as a tool and die maker for various companies including Hewlett Packard until he opened his own production machine shop while living in California. After their move to Wisconsin, Dennis worked in the Lands’ End maintenance department for 25 years. Dennis was a kind and ambitious person who loved animals and enjoyed flying, shooting, and using his skills as a machinist in his personal shop. He suffered heart break after being preceded in death by his wife, Beverly Ann McGauley, just a month prior, and their youngest son, Terry, who died in 2003, at age 29, from complications of juvenile diabetes. Also preceding Dennis in death are his parents; his brother, James McGauley; his in-laws Charles Joseph McComish and Mary Florence (Gille) McComish; his sister-in-law, Marilyn and her husband John Kenyon; his sister-in-law, Karen and her husband Johnny Uebele; and brothers-in-law Jim and Paul John McComish. Dennis is survived by his son Kevin and his children, Rachael, Brittany and Garrett, of Dodgeville, WI; and his son Michael (Monica) and their children Madeline, Marshal, and Morgan of Beaver Dam, WI. He is also survived by his sister-in-law, Joyce McComish, of Madison, WI; and his brother-in-law, Chuck (Judy) McComish, of Overland Park, KS; and many nieces and nephews. Due to the COVID-19 pandemic, a private burial will be held at Our Lady of Hope Catholic Cemetery, Seymour Township, Wisconsin followed by a Funeral Mass later this summer when restrictions are lifted.

The family of Dennis L. McGauley created this Life Tributes page to make it easy to share your memories.

Send flowers to the McGauley family.