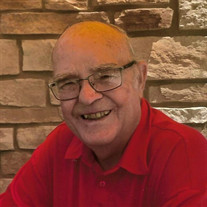 Mineral Point – Delvin Lee "Bud" Harris age 82 of Mineral Point, Wisconsin passed away unexpectedly Wednesday, June 9, 2021 at St. Mary's Hospital in Madison surrounded by his family. Lee was born July 14, 1938 to Frank Elmer Harris and Ellen Irene (Grange) Harris. He grew up on the family farm in rural Mineral Point. He started working at Wayne's Amoco in his younger years followed by working for Nelson Muffler Industries his entire career as a safety manager from 1957 to 1998, when he then retired. He enjoyed spending time gardening, taking care of his lawn, fishing with his buddy and brother in law Tom and spending time with his one and only grandson Lance and watching the Wisconsin Badgers and Green Bay Packers with his family. On October 12, 1963, he married the love of his life JoAnn Theresa Bollant at St. Mary's Catholic church in Mineral Point where they were life long members. Lee is survived by his daughter Amy Jo Steffes (Wade Wendhausen) of Livingston,WI; his grandson Lance William Steffes (Haley Chubb); his sister Linda (Tom) Adams of Mineral Point; his brothers-in-law William (Dorothy) Bollant of Monfort, WI and Gerald Bollant of Fennimore, WI; other relatives and friends. He is preceded in death by his wife of 56 years JoAnn Bollant Harris, his parents Frank and Ellen Harris, his sister Lois Luciani, his mother and father-in-law William and Francis Bollant, his brothers-in-law Paul Luciani, Robert Bollant and Milt Millard, his sisters-in-law Katherine Millard, LaVon Bollant, Judy Bollant and Carolyn Bollant, his nephews Jeff "Charlie" Bollant and Daniel Bollant and great niece Stephanie Shemak. A Mass of Christian Burial for Lee Harris will be held on Thursday, June 17th at 11:00 a.m. at Ss. MARY & PAUL CATHOLIC CHURCH in Mineral Point. Burial will be in St Mary's Cemetery. A visitation will be held on Wednesday from 5:00 until 7:00 p.m. at the GORGEN FUNERAL HOME in Mineral Point and on Thursday from 10:00 until 10:50 a.m. at the church. We would like to send a very special thank you to the St. Mary's 5th Floor East nurses and doctors for all the wonderful care and comfort dad received. A special thank you to the St. Mary's hospice for making dad comfortable. And to the Dodgeville Fresenius Dialysis team, you were like his family to us and we can't thank you enough for all the care and smiles you gave dad over the years. "Barbie", Jazz, Ann, Christy all of you thank you from the bottom of our hearts.

The family of Delvin Lee Harris created this Life Tributes page to make it easy to share your memories.

Send flowers to the Harris family.