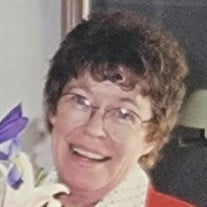 Ridgeway – Delores E. “Toots” Murphy, age 84, of Ridgeway, passed away on Thursday, March 17, 2022, at Bloomfield Healthcare. She was surrounded by her family. She was born in Dodgeville, Wisconsin, on June 24, 1937, and began her career as a CNA at the old Dodgeville General Hospital. She retired in September 2000 from the activities department at Upland Hills Health after over 30 years. She loved her job and made it her mission to keep the elderly patients in a happy place. Toots was known for wearing crazy hats and costumes, with the residents looking forward to her dancing with her “monkey” (puppet) and expecting to see it at every musical event. She received the State Activity Assistant Award of Excellence and then national acclaim as Activity Assistant of the Year in 2001. Delores is survived by her husband of over 65 years, Donald Murphy; her children, Tari (Bob) Greenwood, Kathie Murphy, Rick Murphy and Jeanne Cairns; her grandchildren, Brianna, Brady, Malorie, Keegan, Kelsey, Brittany, and Nicole; 12 great grandchildren; her sister, Connie (Gary) Hendrickson and sister-in-law, Edie Jacobson. She is also survived by a dear friend of 75 years, Bonnie Heibel-Payne, Gleneagle, CO. She was preceded in death by her parents, Dewey and Frances Jacobson, and her brother, DuWayne Jacobson. A Mass of Christian Burial will be celebrated at 11:00 a.m. on Monday, March 21, 2022 at ST. BRIDGET’S CATHOLIC CHURCH in Ridgeway. Fr. Stephen Petrica will officiate. Burial will be held in St. Bridget’s Cemetery. Friends may call from 9:00 a.m. until 10:50 a.m. on Monday at the church. In lieu of flowers, please send a donation to The American Legion Auxiliary.

The family of Delores E. "Toots" Murphy created this Life Tributes page to make it easy to share your memories.