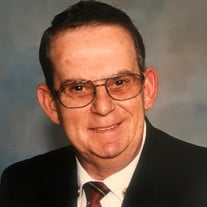 Mineral Point - Delbert LeRoy Carey, Jr., age 77 triumphantly and peacefully entered the Kingdom of Heaven on September 6, 2020, while holding the hands of his son and daughter. Del was born on October 12, 1942, the only son of Delbert LeRoy Carey and his wife Lorraine (Wiesen). His father was drafted in 1943 and served in the Big Red One, being killed in action on June 18, 1944 at Caumont, Normandy. After the war, his mother married a returning veteran, John Edward Byous, and the growing family lived on Dodge Street in Mineral Point. Del graduated from Mineral Point High School in 1961, where he was a drummer, a football captain, and senior class president. On April 11, 1964, Del married Joan Patricia O’Brien of Truman, and they settled in Mineral Point. Del worked as a custodian at the Mineral Point schools, as a gas station attendant at several local stations, including his dad’s (which is now Kwik Trip) and for many years at Wayne’s Standard. He also was an auto mechanic at Engel’s Cheverolet, before being hired at Nelson Muffler in 1975. He worked at Nelson Muffler, through all of its name changes, and retired in 2010. He and Joan owned and operated Carey’s Corner for several years, creating a safe place for teenagers to hang out on weekends. Del was a Packer fan and a Badger football and basketball fan. He served his community by coaching Midget League softball and Little League baseball as well as serving as Cub Master for two years. He was a part of the Gridiron club for its first few years, being the main hamburger chef at the concession stand. When he was young, he played fast pitch for his uncle Art in Jonesdale and slow pitch for the Green Lantern. He was an avid fisherman, catching many muskies, walleyes, and bass with friends and family at Lake Tomahawk in northern Wisconsin. He and Joan were country music fans and attended many concerts. He loved working on things with his hands, especially his boat and could fix or modify or improve anything with moving parts. He was excellent at drawing and was always willing to help someone work on their car. Del was a volunteer fireman for 33 years, serving more than 20 years as captain of #1, and his last two years as Fire Chief. Del is survived by his son Delbert of Mineral Point, his daughter Jackie (Mike) Marx of La Crosse, and three grandsons Alex (Jackie’s) and Orion and Sebastien (Delbert’s), his brother Eddie Byous and sister Patty (Paul) Kearns. Del is also survived by many in-laws from Joan’s extensive family, including brothers-in-law Paul O’Brien of Racine, Gary (Betty) O’Brien of Mesa, AZ, and sisters-in-law Jean (Phil) Stopper of Baraboo, and Mary Karow of Wyocena. He is also survived by many, many nieces, nephews, great-nieces and great-nephews, and a faithful cat named Boots. Del was preceded in death by his loving wife of 53 years, Joan, his father Delbert L. Carey, Sr, his dad and mom, Eddie & Lorraine Byous, his paternal grandparents George and Susie Carey, and his maternal grand parents Elmer & Mary Wiesen, all of Mineral Point. He was also preceded in death by his brothers-in-law Francis, Harold, Mike, and Larry O’Brien and Keith Karow, and sisters-in-law Donna (Paul) and Rita (Mike) O’Brien. A Mass of Christian Burial will be held on Friday, September 11, 2020 at 1:00 p.m. at Ss. MARY and PAUL CATHOLIC CHURCH in Mineral Point. Father Michael Tarigopula will officiate. Burial will be in St. Mary’s Cemetery. A visitation will be held on Friday morning, September 11, from 10:00 am until the time of service at the Church. Due to COVID-19, visitors are asked to wear a mask and maintain social distancing. Internment services will follow. Due to COVID-19, there will be no luncheon following grave-side services. The Family is being assisted in these trying times by the Gorgen Funeral Home. In lieu of flowers the family suggests memorial contributions to the Mineral Point Fire Department and the Mineral Point Rescue Squad. The family would like to thank all of Dad’s nurses and caregivers, Dr. Grunow, the Mineral Point Rescue Squad, the staff at Upland Hills and the doctors and nurses at St. Mary’s Hospital in Madison, including Deb, Kerri, Kate, Renita, and Wendy.

Mineral Point - Delbert LeRoy Carey, Jr., age 77 triumphantly and peacefully entered the Kingdom of Heaven on September 6, 2020, while holding the hands of his son and daughter. Del was born on October 12, 1942, the only son of Delbert LeRoy... View Obituary & Service Information

The family of Delbert LeRoy Carey created this Life Tributes page to make it easy to share your memories.

Send flowers to the Carey family.