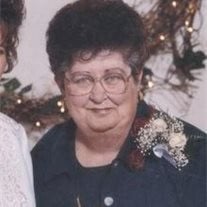 Dodgeville - Dee Ann (Rundle) Van Epps, age 75, of Dodgeville, died on Tuesday, May 8, 2012 at Bloomfield Healthcare and Rehab Center in rural Dodgeville. Dee Ann Rundle Van Epps was born November 11, 1936 to Stansmore and Mabel (Reese) Rundle. Dee attended school in Dodgeville and was proud to be a member of the best class- 1954. Hank and Dee were Prom King and Queen their junior year. After high school Dee Ann moved to Madison and worked until she returned to Dodgeville to marry the love of her life, Eugene "Hank" Van Epps. They were together until Hank's untimely death on March 25, 1996. Her family and friends were her support after Hank passed, but no one could fill the void she felt. They are now together, again. Dee Ann was a home day care "Mom". Many of these children and families became life long friends. The entire Van Epps family became especially close to Jason and Megan McCutchin and Casey, Caana, and Cole Heibel and their parents. She and Megan shared a birthday and have celebrated together for the past 36 years. She has also become close to Megan's husband and children, Kevin, Preston, Molly, Nolan and Owen Weier. Dee was also employed as a bartender. She worked at Midway Lanes, Buck and Ev's, and Pat and Mike's. Dee Ann loved visiting with her many customers. In September 2005 Dee Ann moved to Bloomfield, it became like home to her. It is here that she passed on Tuesday, May 8, 2012. She loved her second home and each and everyone there. She said many times, "if I can't be home, this is where I want to be". Her family knows that the staff mourns with us. Dee Ann loved being the only sister to Dick (Marge), Jimmy (Judy), Jerry (Elaine) and Bruce (Nikki) Rundle. When she married Hank she also became a part of his family; Leila (Don) Williams, Ted (Lois) Van Epps, Ione (Chuck) Williams and Muggs (Ken) Potts. She loved nothing more than her children and grandchildren; Dawn Van Epps, Brad (Judy) Van Epps and children Nick and Andrea, Kelly Van Epps, Darcey (Steve) Dougherty and children Hank and Jack, Debbie (Calvin) Butteris and children Eric and Evan. She is also survived by many nieces, nephews and cousins. Dee was preceded in death by her husband, Hank, parents, Stan and Mabel, brother, Jerry, mother-in-law, Martha and in-laws Leila and Don and Ted and Lois. She also mourned deeply with the passing of her very special friends Bev Severson and Carly Rideout. Funeral services will be held at 12:00 p.m. on Saturday, May 12, 2012 at DODGEVILLE UNITED METHODIST CHURCH. Pastor Rom A. Pegram and Pastor Charlene Bennett will officiate. Burial will be held in East Side Cemetery. Friends may call from 10:00 a.m. until time of services on Saturday at the church.

The family of Dee Ann Van Epps created this Life Tributes page to make it easy to share your memories.