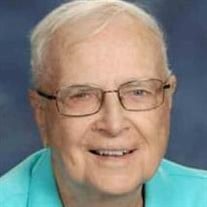 Hollandale – David L. Scott, age 89, of Hollandale, was granted his last wish as he drew his last breath in his own home on Tuesday, December 18, 2018. David Scott, son of Charles and Julia (Kelly) Scott, was born on October 29, 1929. He was born in Madison, Wisconsin. Dave was preceded in death by two brothers, Charles (Alice) and Francis (Vera) Scott and five sisters Helen Walters (Jack), Hazel Disch (Irvin), Gertrude Lemberger (Martin), Gladys Knudsen (George) and Carmen Thompson (Troy) On June 29, 1957 he married Mona Burns at St. Patrick’s Catholic Church in Hollandale where they have been members all of their married life. He is survived by his wife, Mona; his five children Tim (Beth) of Mt. Horeb, Sheri (Karin Silet) of Richland Center, Pauline of Hays, Kansas, David of Phoenix, AZ and Denise of New Glarus; a very special granddaughter Charlotte Scott; plus many nephews and nieces. David was a graduate of the University of Wisconsin before serving in the United States Army in the Finance department while stationed in Germany. He earned his CPA and worked as an auditor for the state of Wisconsin and later opened an accounting firm in Mineral Point. He coached the Hollandale Little League for many years. Dave was a member of St. Patrick’s Knights of Columbus where he was treasurer for many years. He belonged to the Hollandale American Legion where he served as Finance Officer for many years. He was also a volunteer at many community organizations, including Grandview. Dave was involved in St. Patrick’s church as a trustee and financial advisor. He was a wonderful husband and loving father… A Mass of Christian Burial will be celebrated at 11:00 a.m. on Saturday, December 22, 2018 at ST. PATRICK’S CATHOLIC CHURCH in Hollandale. Fr. Paul Eruva and Fr. Thomas Gillespie will concelebrate. Burial will be held in St. Patrick’s Cemetery with Military Graveside Rites accorded by the Hollandale American Legion Post No. 510. Friends may call from 4:00 p.m. until 7:00 p.m. on Friday at the GORGEN-McGINLEY & AYERS FUNERAL HOME in Dodgeville and from 10:00 a.m. until time of Mass on Saturday at the church. In lieu of flowers, memorials will be given to the family to be distributed to several local charities.

The family of David L. Scott created this Life Tributes page to make it easy to share your memories.

Send flowers to the Scott family.