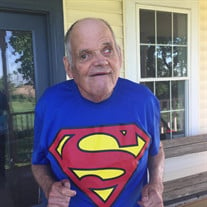 Mineral Point - David Edwin James, age 72, of Mineral Point, went home to Jesus on Thursday May 14, 2020 at Edenbrook of Platteville. David was born June 7, 1947, the oldest of 3 sons to Bob and Mae (Roethlisberger) James. While pregnant with David, Mae contracted German measles which affected David’s mental ability. Although David’s mentality peaked at about the age of a 3 year old this did not stop David from living a wonderful life. He lived and helped farm with his parents and brothers until the cows and machinery were sold in 1994. David was an incredibly strong man with a beautiful and kind soul. David’s passion in life was people. He wanted to know everyone’s name. That was his go to question any time he met anyone. “What’s your name?” He loved to shake people’s hands and give people hugs. Any time David was out and about and if his hands were empty he was trying to shake the hand of every person he met. David also liked to give kisses on the cheek. His niece and nephew learned to use this as a weapon as David was known to give especially wet kisses. David also loved to help out until Parkinson’s disease took away his physical ability. No matter what you were doing David would tell you “I help” and help he did. David was one of the earliest clients of Hodan Community Services and loved everything about going to “school” as he lovingly referred to it. Any time David saw a Hodan bus he would tell you “my bus”. David helped to introduce Chris, who worked with him at Hodan, to his brother Tom. David loved to stand outside his house listening to the radio and waving to people that drove by. He was a local landmark to those that drove between Mineral Point and Darlington on Hwy 23. David was also known for his signature bib overalls. David loved to go for a ride in the car and would often ask if he could have a cheeseburger and root beer. David had some favorite answers to questions like how old are you? His answer “52” no matter what the actual answer was. David had a special bond with his niece and nephew and loved spending time with them. When they were younger and growing up on the farm he was the best playmate. He was bigger and stronger and loved to pull the kids in the wagon or sled. The three of them went on many adventures on the farm, not all of them necessarily approved by an adult. David also loved to help Chris. From holding the rope for the horses to picking asparagus in the road ditch. David is survived by his brother Tom (Christina) James of Mineral Point; niece Staci (Matt) Sauer of Mineral Point; and nephew Jeremiah James of Combined Locks, WI; and two great-nephews Aiden and Landen Sauer. He is further survived by several cousins, friends and neighbors. David was preceded in death by his parents Bob and Mae James and his brother Donald James. The family would like to thank the Hodan Community Services for providing a place where David and his abilities could really soar. Edenbrook of Platteville for their great care these last four months and Staci James-Sauer for providing such loving care for David the last four years. Also thank you to all of David’s caregivers along the way. David will be fondly remembered and sadly missed by many family and friends. Memorials for David can be sent to Hodan Community Services. A graveside memorial service is planned for Memorial Day weekend at the Waldwick Cemetery in Waldwick.

Mineral Point - David Edwin James, age 72, of Mineral Point, went home to Jesus on Thursday May 14, 2020 at Edenbrook of Platteville. David was born June 7, 1947, the oldest of 3 sons to Bob and Mae (Roethlisberger) James. While pregnant with... View Obituary & Service Information

The family of David Edwin James created this Life Tributes page to make it easy to share your memories.

Send flowers to the James family.