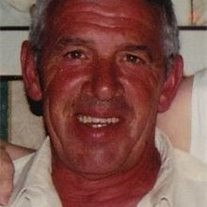 Mineral Point – David Carroll Ray, age 70, died unexpectedly on Thursday, September 27, 2012, surrounded by his loving family at UW Hospital in Madison, WI. David was born in Darlington, WI on November 16, 1941, the son of Homer and Ethel (White) Ray. David attended Mineral Point High School where he met the love of his life, Sharon Douglas. They were married on New Year's Eve, 1960 at the Holy Rosary Catholic Church in Darlington, WI. Along with his father, he owned and operated Rays' General Repair for nearly 30 years. He served as a dedicated volunteer firefighter in Mineral Point for 28 years. Prior to, and throughout his retirement, he drove a school bus for the Mineral Point School District. He was an avid outdoorsman who enjoyed hunting, fishing, camping and constantly tinkering around with projects. You can bet you would find him winding down at the end of the day sitting on the front porch swing, drinking a cold one. He is survived by his wife, Sharon; his children, Dennis (Brenda), Sherry, Duane, and Rina (Thad) Salverson; his 12 grandchildren, Ben, Nikki, Mikey and Katy Ray, Chris Graber and Cory (Billy) Bennett, David Greene, Morgyn, Melissa and Bryant Ray, Logan and Alex Salverson; and his 7 great-grandchildren. David is also survived by his siblings John (Karen), Alvina (Jim) Sturz, Billy (Marcia) and Clyde (Kitty); his mother-in-law, Avis; and many nieces, nephews and dear friends. David will be reunited in heaven with his parents; children, Robin and Carolyn; brother, Gary; granddaughter, Mandy; his father-in-law, 'Bud' Douglas; and his very special aunt, Gertie. A private memorial service will be held for the family on Tuesday, October 2, 2012 at GORGEN FUNERAL HOME in Mineral Point. Burial will be in St. Mary's Cemetery. Friends may call from 4:00 p.m. until 8:00 p.m. on Monday, October 1, 2012 at GORGEN FUNERAL HOME. David will be missed for his dedication, hard work, contagious smile and witty sense of humor.

The family of David Carroll Ray created this Life Tributes page to make it easy to share your memories.

Send flowers to the Carroll family.