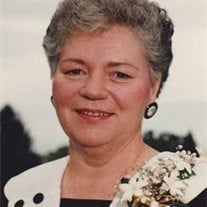 Dodgeville / Mineral Point - Darlene M. Ottoway, age 77, of Dodgeville, formerly of Mineral Point, entered eternal life peacefully on Friday, October 5, 2012 at Upland Hills Nursing & Rehab Center in Dodgeville. She was born on June 23, 1935 to Reuben and Cecelia (O'Reilly) Bertz in Loyal, WI. Darlene was united in marriage to Jerome (Gene/Jerry) Ottoway on September 15, 1956. She attended Marquette University and received a certificate as a dental assistant. She worked many years in the dietary department at the Mineral Point Care Center and then spent 15 years at Lands' End in the building maintenance department until her retirement in 2003. She enjoyed her work, her co-workers and all the friends she has made over the years. She loved to socialize, play bingo, be with her family and sit on her front porch with friends. Darlene is survived by her children: Wayne (Terry) of Allen, TX; Dave of Mineral Point; Jerry (June) of Linden; Julie (Kevin) Sincox of Ridgeway; Robert of Phoenix, AZ; and Bill (Trisha) of Mineral Point. Seventeen grandchildren: Matthew and Quinn Ottoway; Jacob, Jenah and Mandi Mutert; Cherrie (Chris) Hohler; Angel (Josh) Freund; Erin Sincox; Crystal, Harmony and Liberty Ottoway; Ian, Cassidy, Gabriel, Rebekah and Uriah Ottoway. Her siblings/spouses: Bob (Joan) Bertz of Loyal; Colleen (Don Anderson) Kraeger of Cudahy; Joy Bogdonovich of Greenwood; Joann (Max) Hayden of Eau Claire; and Donna Gruber, her twin sister, of Madison; her brother-in-law, Clarence Bushnell of Lodi; sister-in-law, Dorothy Jacoby of Neillsville; sister-in-law, Marilyn Pavelske of Berlin; and brother-in-law, James (Shirley) Ottoway of Omro; as well as, many other relatives, friends and her beloved cat and companion, Petra. She is preceded in death by her husband, Gene, on April 2, 1977; an infant daughter, Susan; a brother, Bill (Betty) of Ann Arbor, MI; a brother, David of Neillsville; a sister Virginia Bushnell of Lodi; a sister Rosemary (Josh) Sanford of Reedsburg; a brother-in-law Ed Bogodonvich of Greenwood; a sister, Deanna Will of Van Dyne; sister-in-law, Delores Werch, Berlin; a sister-in-law, Kathleen (George) Crimmings of Berlin; and a brother-in-law, Frank Palveske of Berlin. A Mass of Christian Burial will be celebrated at 11:30 a.m. on Tuesday, October 9, 2012 at ST. JOSEPH'S CATHOLIC CHURCH in Dodgeville. Father Patrick Wendler will officiate. Friends may call from 9:30 a.m. until time of Mass on Tuesday at ST. JOSEPH'S CATHOLIC CHURCH in Dodgeville. Burial will be held at 11:00 a.m. on Wednesday at Oakwood Cemetery in Berlin, Wisconsin. She will be greatly missed by all that knew and loved her. Our families would like to thank the doctors and nurses at Upland Hills Hospital; the Upland Hills Nursing and Rehab Center; and Hospice. We appreciate each and every one of you and the work you do.

The family of Darlene M. Ottoway created this Life Tributes page to make it easy to share your memories.

Send flowers to the Ottoway family.