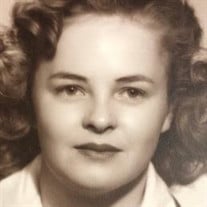 Belmont - Darlene (Harris) Hinkins Ayer of the small town of Belmont Wisconsin – Darlene Ayer, at 90 years old passed away peacefully, departing our world to take her place in her new heavenly home on July 8, 2018. Darlene was born on May 18, 1928 the only child of John A. and Bernice (Mottley) Harris. She was raised on the family farm near Mineral Point, Wisconsin. Years later, she fell in love with the love of her life, Wendell Hinkins. They married on September 3, 1946; they farmed near Belmont, raising their four daughters. Wendell preceded Darlene in death on October 3, 1988. In the following years, Darlene would go on to marry Harold Ayer on June 23, 1991. The newly wedded couple resided in Belmont until December of 2012. Darlene moved to an assisted living community in Lincolnshire, IL near her daughter Becky and Harold moved to Fond du Lac to be closer to his children due to his failing health. Darlene adored her family and friends, found pleasure in carefree moments on the highway with windows down and the radio turned up. She was a woman of elegance with a striking personality full of love, strength and laughter. Her faith was strong and steadfast. Darlene used to say that her greatest gift in life was raising her girls; for a woman that valued her legacy so much, she was sure to leave an impactful imprint on the hearts of all those in which she encountered and loved. Darlene was survived by daughters, Sharon (Bob) Holtz of Marshall WI, Janice (Rex) Wakefield of Webb City, MO., Joy (Jay) Hollenberger of Mount Horeb, WI and Rebecca (Frank) Ponterio of Lake Forest, IL. Her grandchildren; Jennifer Holtz (Bill Buss), Cindy Woods (Matt Chitwood), Bobbi (Chris) Gorte, Brad (Shannon) Holtz, Jonathan (Ashley) Wakefield, Jason (Allie) Wakefield, Jordanna Wakefield (Tim Boos), Jessica Hollenberger (Kevin Beck), Justin Hollenberger (Jamie Shanahan), Jamie Hollenberger (Taylor Jarocki) and Isabella Ponterio. Her great grandchildren, Morgan and Kiley Washburn, Colt (Kendra Robinson) and Brandon Woods, Brielle and Avery Gorte, Camille and Brycen Holtz and Hudson and Cypress Wakefield. She was preceded in death by her parents, her husband Wendell Hinkins, Harold Ayer and infant daughter Gail. Her family would like to acknowledge the loving care she received the past few years at Warren Barr of Lincolnshire, IL and the special caregivers from Heartland Hospice. A celebration of her life will be held at 11:00 a.m. on Thursday, July 12, 2018 at the CONGREGATIONAL UNITED CHURCH OF CHRIST in Mineral Point. Pastor Rich McLeer will officiate. Burial will be held in Belmont Cemetery. Visitation will be held on Wednesday from 4:00 p.m. until 7:00 p.m. and from 10:00 a.m. until 10:50 a.m. on Thursday at the CONGREGATIONAL UNITED CHURCH OF CHRIST in Mineral Point.

Belmont - Darlene (Harris) Hinkins Ayer of the small town of Belmont Wisconsin &#8211; Darlene Ayer, at 90 years old passed away peacefully, departing our world to take her place in her new heavenly home on July 8, 2018. Darlene was born on... View Obituary & Service Information

The family of Darlene Hinkins Ayer created this Life Tributes page to make it easy to share your memories.

Belmont - Darlene (Harris) Hinkins Ayer of the small town of...

Send flowers to the Ayer family.