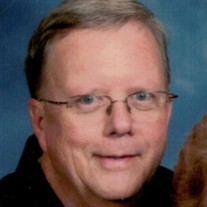 Dodgeville– Daniel D. Roble, age 74, of Dodgeville passed away Tuesday, December 29, 2020 at St. Mary’s Hospital in Madison. He was born August 7, 1946 to Norman and Fyrn Roble in Sturgeon Bay and grew up in Door County. Dan’s passion for music began when he attended Sturgeon Bay High School. As a student, Dan was always playing in the band and sharing his music with everyone. Dan attended Carroll College for his bachelor’s degree in music education and moved to Dodgeville to begin his career in music education. In 1970, Dan married Kim Vincent, who was also teaching music in the Dodgeville School District. Dan continued his education at UW-Platteville to obtain his master’s degree in music education. He was a member of the Kappa Delta Pi Honor Society in Education. Mr. Roble was very compassionate and showed kindness to everyone he met. He was known for his sense of humor and ability to connect with everyone. As a teacher in the Dodgeville School District, Dan shared his love for music by teaching students for 35 years. Dan taught the Dodgeville Middle School Band, Middle School Orchestra, and High School Orchestra. A special memory included a performance of the 1812 Overture with the DMS Band that included the Dodgeville United Methodist Bell Choir and cannons. He had a successful middle school summer band program, a middle school summer jazz ensemble, a summer community orchestra and earned a national grant for technology in music education with the support and friendship of Earl Liddle at Ward-Brodt in Dodgeville. On a state level he served on the Wisconsin School Music Association music education board for three terms and regularly volunteered for music education organizations. The Robles were very fortunate to work with John and Charlene Mingst, Richard Burris, Mark Ramthun, Danelle Schmid, and Julie Harris for many years in the music department of the Dodgeville School District. Dan was proud to serve on the committee for the new Dodgeville High School auditorium. Dan’s love and music education also extended outside the Dodgeville School District. As members of the Dodgeville United Methodist Church, he and Kim were faithful members of the church choir. Dan started and served as the director of the United Methodist Church Handbell Choir. For many years Dan was a dedicated member of the Dodgeville Kiwanis club and served as their president for two terms and managed the Kiwanis Concession Stand at Governor Dodge State Park for several summers. Dan Roble’s German Band provided a yearly performance for the Kiwanis Chicken BBQ. His German Band would develop into a group of musicians who were dedicated to bringing joy and music to many throughout southwest Wisconsin. In retirement Dan was privileged to serve the community as a pharmacy technician at the Hometown/Corner Drug Pharmacy for sixteen years. He often enjoyed the coffee club, Red Room and Cobblestone breakfasts, his lunch bunch at Bob’s BBQ and Dinos, and good times with his friends and family. Dan loved music and his life centered on sharing his love of music. In addition to his passion in music education, he was an active participant in the Lancaster City Band, Platteville City Band, Mineral Point City Band, Potosi City Band, Mt. Horeb City Band, and any local groups that needed a tenor saxophonist. For many years he and John Mingst worked to present the Symphony of the Hills at Governor Dodge State Park. He sang in the Iowa County Scenic Sounds and with church choirs in the Dodgeville area. Most recently, Dan was able to perform alongside his son Matthew in the Hal Edwards Orchestra on summer nights at Devil’s Lake State Park and at the annual Wisconsin Dells High School Big Band Dance. Dan was always interested in Jeopardy, crosswords, reading, and exploring technology. Dan enjoyed traveling to various destinations with his family and friends. His most memorable vacations included traveling with Kim on the Wisconsin State University at Platteville Wind Ensemble European Tour and later with his son Chris and Lancaster City Band to Heiden, Germany. He always looked forward to spending precious time with his wife, children and grandchildren. Dan was preceded in death by his parents, Norman and Fyrn Roble, his sister Hazel Krowas, and many more special family members that were a part of his life. He is survived by his wife Kim of 50 years; his sons, Christopher (Angela) Roble in Green Bay and Matthew Roble in Wisconsin Dells; his grandchildren Allison and Emma; his sister-in-law Ruth Currier and niece Missy (Tim) Piper and families in Burnsville, Minnesota, brother-in-law Herb Krowas in Sturgeon Bay and nephews Chad (Darcy) Krowas and family in Kimberly, and John (Nina) Krowas and family in San Francisco, California; cousins Bev (Bill) Wages and family in Sturgeon Bay, Dallas (Helen) Croft and family in Fennimore, Gene Cliff and family in Dubuque, Iowa and Sally (Charles) Aurit in Mineral Point and family. Special thanks to Dr. Peter Mullin, the doctors, nurses, and staff of Upland Hills Health, the doctors, nurses, and staff at Saint Mary’s Hospital, the staff at Ingleside Communities, and the staff of SSM HomeHealth for taking such good care of Dan. A huge thank you to all the prayers from Dan’s friends and families. He truly appreciated and loved all of you. Due to COVID-19 concerns, the family will be having a private service and burial. A celebration of life will be held at a later date in the Dodgeville community. In lieu of flowers, memorial donations may be sent to the Dodgeville School District music department and the Dodgeville United Methodist Church music department. Please specify In Memory of Daniel Roble.

The family of Daniel D. Roble created this Life Tributes page to make it easy to share your memories.

Send flowers to the Roble family.