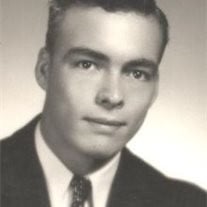 Mineral Point - Daniel Bradley Evans, age 71 of Mineral Point passed away on December 16, 2012. ~WHAT IS A LIFE?~ "It is a flash of a firefly in the night. It is the breath of a buffalo in the wintertime. It is the little shadow which runs across the grass and loses itself in the sunset." Crowfoot: Last Words Brad began his life May 8, 1941, the second son of Daniel and Elaine Evans. The real McCoy, Brad was an original, sitting loosely in the saddle of life. He loved, dreamed, planned, laughed, worked, played, and died . . .LIVING. If he had regrets, they were few, and likely, reflections of a deepened perspective earned through life's journey. Ambition, ingenuity, dedication and luck brought Brad much success in business endeavors. Friendships were many, valued and largely founded due to his creativity, wit, generosity, sense of humor and passions. Wisconsin never lost his heart. Brad loved the Badgers, the rolling hills and his frequent getaways to lakes and rivers. He hunted, fished, hiked, and golfed in the serenity of the state he loved where he cultivated a deep respect for nature. Brad possessed an inherent sense of pride that encompassed family, friendships and tradition. His accomplishments were many and varied, yet he remained humble and true to himself and his ideals. He had the cerebral presence to sort out what was most important, freely select the enjoyments available and become completely absorbed in the awe and beautiful natural wonders of God's creations. Brad was blessed with a wonderful life, so full and rich, it couldn't help but spill onto those he associated with. He was a good man, son, father, husband, brother, uncle, and friend, always there to offer support, comfort, advice and encouragement in whatever way he could. On December 15, 2004, Brad married his wife and soul-mate, Julie Monson Evans, at the Little Brown Church in Iowa, where Julie's parents were married. Together, they created a home "stuffed" with love, memories, warmth and old-fashioned nostalgia that stated exactly who Brad and Julie were. A visit there just plain felt good . . . like going home. When Brad left this world, he could honestly say he'd given his all, took chances, made mistakes, did his best and was well-satisfied with most results. For all of us who had the privilege to know and love him, our world will be a bit smaller without him. A Celebration of Brad's Life will be held on January 26, 2013 from 1:00 until 3:00 p.m. at Ludden Lake Country Club.

Mineral Point - Daniel Bradley Evans, age 71 of Mineral Point passed away on December 16, 2012. ~WHAT IS A LIFE?~ "It is a flash of a firefly in the night. It is the breath of a buffalo in the wintertime. It is the little shadow which runs... View Obituary & Service Information

The family of Daniel Bradley "Brad" Evans created this Life Tributes page to make it easy to share your memories.