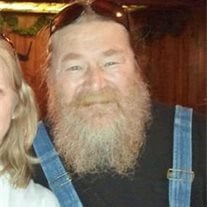 Dodgeville - Clark Edward Mindermann, age 54, of Dodgeville, passed away unexpectedly on Friday, February 17, 2012. He was born on July 16, 1957 in Monroe, Wisconsin, a son of the late John and Marsha (Vinger) Mindermann. Clark lived a prosperous life, bringing joy and smiles to all that he knew. He was an outgoing, loving character with a huge heart. Clark enjoyed being surrounded by his family and friends. He loved to cook, often times taking over any kitchen he was in. Clark was an avid reader, gardener and craftsman. He served in the Air Force, stationed in Germany where his daughter Kyle was born with his former wife Barbara Perkins. Clark returned to the U.S. and made home in Dodgeville. Clark married his longtime love Sandy Rickey on August 25, 2011 in a small ceremony. Clark loved going on adventures, anything from small trips to Madison exploring the Capitol and Union, to family vacations to Jamaica. He was a very social man who could strike up a conversation with anyone, anywhere. He loved to talk news, politics, economy, football and just about anything else. He loved spending time at home around the fire, family and friends by his side, good tunes on the stereo, food on the grill, beverages in hand and laughter all around. Clark is survived by his wife and longtime love Sandy Rickey, his beloved dog Duncan. His daughter Kyle (Tim) Shaw, his brother Fred Mindermann, his sister Mary Mindermann-Grimm, two grandkids who were the light of his life, Vance Edward and Parker George Mindermann, nephews and one niece Alex, Andrew and Lauren Mindermann, Max and Baxter Grimm, his Aunt Mazie, Uncle Dick, many loving cousins, the Rickey family, many close and dear friends. He is preceded in death by his parents, John and Marsha Mindermann. A Memorial Service will be held at 7:00 p.m. on Tuesday, February 21, 2012 at the GORGEN-McGINLEY & AYERS FUNERAL HOME in Dodgeville. Pastor Jack Way, of Barneveld Lutheran Church, will officiate. Friends may call from 4:00 p.m. until time of services on Tuesday at the funeral home. We love you Clark. You will be thought of and missed every minute of every single day.

Dodgeville - Clark Edward Mindermann, age 54, of Dodgeville, passed away unexpectedly on Friday, February 17, 2012. He was born on July 16, 1957 in Monroe, Wisconsin, a son of the late John and Marsha (Vinger) Mindermann. Clark lived a prosperous... View Obituary & Service Information

The family of Clark E. Mindermann created this Life Tributes page to make it easy to share your memories.

Send flowers to the Mindermann family.