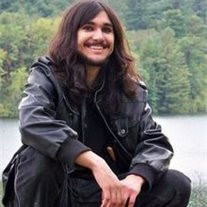 Highland - Christopher Jon Ryan Perez passed away on January 27, 2017. His love for life and his love for those in his life will be forever missed. He is survived by his mother and step father, Robben and Douglas Kosharek of Highland, WI, his father Jose Perez of Mt. Horeb, WI and his brother Eryk Perez of Highland, WI, his half-brother Daniel Perez of Louisville, TX and his step brothers and sister, Rob and Andy Kosharek and Sarah (Craig) Gilbertson and two step nieces. He is also survived by his grandparents, George and Geneva Conners of Mineral Point, WI, his Uncle Randy and Aunt Ellen of Austin Texas, his Uncle David and Aunt Cindy of Hollandale and his Aunt Teri and Uncle Ralf von Brevern of Gillett, WI as well as his cousins, school class mates, co-workers and many friends. Christopher was born in Fort Worth, Texas on November 23, 1993. The family moved to Wisconsin when he was an infant. He graduated from Mineral Point High School in 2012 and attend the downtown campus of MATC Milwaukee for Music Occupations. Music was the love of his life. He played guitar and drums and played for concerts through MATC for the schools Rock Hunger events to raise money and food for the areas food shelters. He loved Winnie the Pooh and Star Wars, he loved watching WWE pay per view events with his family, and playing video games. He was employed at the Kwik Trip in Mineral Point, where he was training to become a shift leader. He loved his job there, he always had stories of customers and co works to share with his family. His most proud moment was meeting WWE stars Dean Ambrose and Jack Swagger as they stopped there on the way from a show in Dubuque, heading to another show in Green Bay. The family extends a heart-felt thank you to Donny and Teresa Bomkamp for being there with us and for the food and to our other friends who have dropped off food to the house, called and sent messages to us. Your kindness and love will never be forgotten and always appreciated more than words can express. Funeral Services will be held on Wednesday, February 1, 2017 at 2:00 p.m. at the WALDWICK COMMUNITY CHURCH. Friends may call on Tuesday, January 31, 2017 from 4:00 until 8:00 p.m. at the GORGEN FUNERAL HOME in Mineral Point and on Wednesday from 1:00 until time of service at the church. Pastor David Ritchie will officiate. Burial will be in the Waldwick Cemetery.

Highland - Christopher Jon Ryan Perez passed away on January 27, 2017. His love for life and his love for those in his life will be forever missed. He is survived by his mother and step father, Robben and Douglas Kosharek of Highland, WI, his... View Obituary & Service Information

The family of Christopher Jon Ryan Perez created this Life Tributes page to make it easy to share your memories.