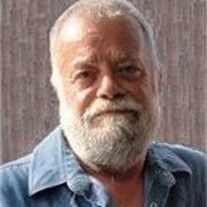 Spring Green – Charles D. "Chuck" Davis, age 67, died unexpectedly at home on Monday, April 14, 2014. Chuck was born on September 17, 1946, in Stanley, Wisconsin, to Charles and Beverly (Clifton) Davis. Chuck grew up in Madison, attended East High and served in the Air Force from 1963 to 1965 as a Transportation Specialist. He spent 20 years at Springs Window Fashions in Middleton, WI. After retiring from Verona Septic Systems in 2009 (having missed the "college experience" in his youth) he attended Southwest Tech in Fennimore to pursue his interest in computer technology. Although he enjoyed "the experience", health concerns left him unable to finish his education. Actually Chuck's "real life" education began in1974 when he met his soul mate, Terri, and he found himself on the Jelle family farm. He had no choice but to learn how to put up hay, plow snow, cut wood, fence – all necessary to keep the "little woman" happy. Chuck and Terri married in October of 1978. Besides keeping busy on the farm, his passion was riding his Harley – it didn't matter where he rode as long as he was riding. Chuck was proud to be part of the Masonic Fraternity and was a Past Master at Poynette #173 Lodge. He was a member of the NRA, enjoyed gun shows and spent many hours volunteering for the Iowa County Humane Society in Dodgeville. Family – especially the grandchildren - and friends were important to Chuck. Chuck is survived by his wife Terri; daughter Tina (Keith) Finke; son Jerry Davis; 6 grandsons (soon to be 7); and 1 great-granddaughter; his father Charles Davis; brother Dennis (Chris) Davis; sister Marlene (Paul) Fotes; brothers-in-law Fran (Kathy) Jelle, Tim (Peggy) Jelle; sister-in-law Bobbi Jelle; many nieces and nephews, and his cat Harry. He was preceded in death by his mother Beverly, sister Mary Ellen Courtier, brother-in-law Dennis Courtier, sister-in-law Judy Davis, and brother-in-law Dick Jelle. No formal services will be held at this time, but a celebration of Chuck's life will be held at a later date.

The family of Charles D. "Chuck" Davis created this Life Tributes page to make it easy to share your memories.