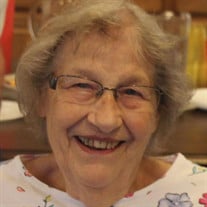 Dodgeville - Catherine Bystol Palzkill passed into Heaven with her eyes wide open and surrounded by her children on Saturday, January 15, 2022. She was born on October 8, 1929 to Lambert and Freida (Radtke) Orth in Castle Rock, WI.. She grew up in Mineral Point and graduated from Mineral Point High School with the class of 1948. She remained close friends with her classmates the remainder of her life. The Friday morning coffee time at the Pointer Cafe with her classmates was always a highlight. Catherine met the handsome and fun Tommy Bystol at a dance in Hollandale. They fell in love and were married on September 29, 1948. She worked for Burgess Battery, first on the line and then as their office secretary. Terry was born in 1950, Cheryl in 1955, and Patti in 1957. There were many picnics, fishing adventures and every Sunday was spent at Grandma Bystol’s home along with aunts, uncles and cousins. In 1961, she went to work at Ivey’s Drug Store and continued to work there until she retired in 2011 at the age of 80. In 1967 Tommy and Catherine moved their family to Dodgeville where they owned and operated Park View Mart outside of Governor Dodge State Park. Tommy passed in 1978 and Catherine moved back to Mineral Point. Walking to work one day Catherine stopped to visit with Barber Dick. She and Ralph (barber Dick) became friends and she found herself once again loved and cherished. She and Dick were married on October 30, 1981 at Ss. Mary’s Catholic Church. She enjoyed playing Tuesday night euchre cards, Friday night fish fry with friends, and spending time with her children and grandchildren. Ralph passed on January 6, 2005. Catherine loved living in Mineral Point. Catherine is survived by her children Terry (MaryJo) Bystol, Patti (Scott) Finley of Dodgeville and Cheryl (Mike) Schlicht of Mount Horeb; 6 grandchildren Ray (Tamara) Finley, Caitlin (Jason) Hirsch, Julia Bystol (Adam Kerian), Erik (Michelle) Schlicht, Joe (Elizabeth) Schlicht and Trevor (Amanda) Schlicht; 12 Great-grandchildren Hayley, Brennan and Loki Finley, Tessa, Levi, and Dane Hirsch, Trenton Lewis, Ava Kerian, Kelly and Cassidy Schlicht, and Madeline and Harriet Schlicht; her sister Delores (George) Noggle; her sisters-in-law Dorothy Palzkill, Janice Palzkill and many beloved nieces and nephews. She was preceded in death by, her parents, her husbands Tommy and Ralph, her sister Doris (Bud) Schlamp, her brothers Raymond (Dorothy), and James (Charlotte) Orth, Tommy’s brothers and sisters Olin (Lillian), Ann (Armond) Huseboe, Oscar (Marie), Marion (Fay) Garthwait, Margret (Milton) Olson, Millie (Vernus) Watkins and nieces June Saevre, Sharon Hahn, Linda Sommers, Barbara Bystol, Joan Bystol, Viola Brennan and Mary Margaret Olson; nephews Lester Bystol, Arthur Bystol, Paul Watkins and Harley Bystol. Ralph’s brothers and sisters Lambert, Charles, Bernice McMurrough, Vincent, Ruth Preston, Firmin, Jerome, Jean Tesch, and Michael. Private family funeral services will be held at the Grace Lutheran Church in Dodgeville. Pastor Mark Williamson will officiate. Burial will be in the Otter Creek Cemetery. A Celebration of Life will be held at a later date. We would like to thank the staff at Crest Ridge for loving our mother as if she were their very own. You will always be very special to us. In lieu of flowers memorials can be made to Agrace Hospice, Grace Lutheran Church or CrestRidge Assisted Living. Memorial cards may be mailed to the Gorgen Funeral Home, 310 Ridge St., Mineral Point, WI 53565

Dodgeville - Catherine Bystol Palzkill passed into Heaven with her eyes wide open and surrounded by her children on Saturday, January 15, 2022. She was born on October 8, 1929 to Lambert and Freida (Radtke) Orth in Castle Rock, WI.. She grew... View Obituary & Service Information

The family of Catherine M. Palzkill created this Life Tributes page to make it easy to share your memories.

Send flowers to the Palzkill family.