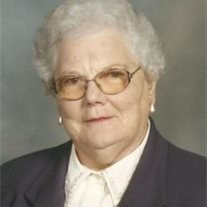 Cobb - Carol E. Novak, 89, of Cobb, passed away peacefully on Tuesday, July 17, 2012 at St. Mary's Hospital in Madison. Carol was born on November 3, 1922 to Ernest and Mamie (Christopher) Butteris of Edmund. Carol attended the one room school at Sunny Slope and Mt. Hope. She started high school in Dodgeville and then transferred to Cobb High School. While at Cobb she caught the eye of fellow classmate Edwin Novak and he became the love of her life. After graduating in 1940, Carol worked as a teller at Strong's Bank in Dodgeville. She and Edwin were married on March 4, 1944 at the West Bethlehem Church in Edmund. After marriage, Edwin and Carol took over the Novak family farm and embarked on a journey that lasted 66 years. The two farmed side by side and raised four children. Carol was active in the community and for many years served on the Cobb United Methodist Church board. She was a member of Cobb United Methodist Women, volunteered at Red Cross Blood drives and was an election worker for the town of Eden. Carol loved cooking, was an excellent seamstress and an avid bowler. One of the most important parts of her life was her devotion to Edwin, her children and her grandchildren. She truly enjoyed family gatherings with not only her own family, but spending time with her sisters and brother and their families. After Edwin's death, Carol resided at Upland Hills Nursing and Rehab, Dodgeville, and that became her home for the last two years. Carol is survived by three children, Daniel Novak, of Highland, Susan Novak Murphy, Mt. Vernon, IA and Kevin (Anita) Novak of Edmund; Nine grandchildren, Todd Novak, Tim Novak, Brandee Jo Austin, Starr (Adam) Wilson, Summer Novak, Tara (Shyler) Olsen, Aaron Murphy, Stacey Novak and Travis Novak and ten great-grandchildren. She is further survived by her sister Marie Widish, Dodgeville and her beloved nieces and nephews. She was preceded in death by her husband Edwin on June 22, 2010, son Roger on January 16, 2010, granddaughter Danielle Novak on March 9, 2001, her parents, her brother Dean Butteris and her sisters Viola McNeill and Gayle Kleist. Funeral services will be held at 11:00 a.m. on Saturday, July 21, 2012 at UNITED METHODIST CHURCH in Cobb. Burial will be held at Eden Cemetery. Friends may call from 9:30 a.m. until the time of service at the church. Memorials in memory of Carol can be made to the Cobb United Methodist Church.

The family of Carol E. Novak created this Life Tributes page to make it easy to share your memories.

Send flowers to the Novak family.