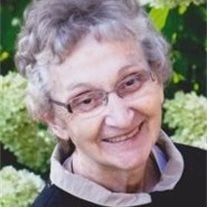 Mineral Point - Carol Ann (McCluskey) Cody, age 79, of Mineral Point, passed away peacefully at Sienna Meadows on Thursday, August 13, 2015 surrounded by her loving family after a courageous battle. She was born on May 9, 1936, daughter of Edward and Helene(Heibel) McCluskey. She graduated from Dodgeville High School in 1954. She was united in marriage to Edward E. Cody on June 1st, 1957. He preceded her in death on July 21, 2008. Carol and Ed farmed in Mineral Point all their lives. Carol spent most of her days taking care of her family; you never left her kitchen hungry. She loved spending time with friends and going out for a sandwich. Carol enjoyed watching her grandchildren in sports and other events. Carol was a devoted Catholic and an active member of the Ss. Mary & Paul Catholic Church and the CCW. Carol is survived by 2 daughters, Ann (Fred) Kendall and Jane (Gary) Sporle; daughter-in-law, Kelly Cody; her 11 grandchildren, Daniel (Kelly) Kendall, Bryan (Carly) Kendall, Troy Kendall, Mark Kendall, Jamie (Kimberly) Sporle, Jessi (Andy) Steingraber, Kacy (Danny) Carey, Kari (Frank Kaminski) Sporle, Danielle (Grant) Miller, Alyssa Cody, Nate Cody; 2 great grandchildren, Connor and Alex Kendall; and one on the way; her sister, Marian (Bernie) Walsh; sisters-in-law, Mary Burke and Norma McCluskey; and many nieces, nephews and friends. Carol was preceded in death by her parents, her husband, Ed, her son, Phil Cody, her mother and father-in-law, William Sr. and Margaret (Laufenberg) Cody, her brothers, Donald and Joseph, her sisters, Delores Hammond, Betty Evans, and Lois Jones, her brothers-in-law, William Cody, Jr., David Cody, LaVerne Cody, Adrien Cody, John Cody, Paul Knight, George Burke, John Hammond, Donald Evans, Thomas Jones, her sisters-in-law, Emily Knight, Letha Cody, Helen Cody, Josephine Cody, Eilene Cody, Patricia Cody, Marilyn Cody. Carol was a compassionate person who couldn't do enough for others. Her family was her main stay in life. She loved the time that she spent with her husband, family and friends. She was a wonderful wife, mother, grandmother, sister, aunt and friend. She was greatly loved and will be missed by all who knew her. We would like to thank Upland Hills Hospice and Dr. Grieshaber. We would like to extend our greatest appreciation to Sienna Meadows Mineral Point, for welcoming Carol with open arms and your loving kindness and care. A Mass of Christian Burial will be held on Tuesday, August 18, 2015 at 12:00 noon at Ss. Mary & Paul Catholic Church in Mineral Point. Fr. Monte Robinson will officiate. Burial will be in St. Paul's Cemetery. A visitation will be held on Tuesday from 9:00 until 11:45 a.m. at the church. In lieu of flowers, please make donations to the local Alzheimer's Dementia Foundation.

Mineral Point - Carol Ann (McCluskey) Cody, age 79, of Mineral Point, passed away peacefully at Sienna Meadows on Thursday, August 13, 2015 surrounded by her loving family after a courageous battle. She was born on May 9, 1936, daughter of... View Obituary & Service Information

The family of Carol Ann Cody created this Life Tributes page to make it easy to share your memories.

Send flowers to the Cody family.