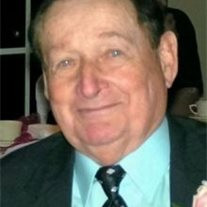 Ridgeway - Burnell Ambrose McDermott, age 95, of Ridgeway, passed away on Thursday, March 26, 2015, at Upland Hills Rehab following a brief illness. He was born May 25, 1919 in Ridgeway, the son of Henry and Agnes McDermott. He grew up on a farm in rural Ridgeway with two brothers and three sisters. He married the love of his life, Ruth Johnson on September 27, 1947. He farmed on the family farm for a short time prior to starting a construction business with his father-in-law. When his father-in-law retired, Burnell joined the Operating Engineers and worked for various construction companies. After he retired he enjoyed working for the Village of Ridgeway and The Springs Golf Course. Burnell was a proud Irishman who enjoyed fishing, going to the casino and traveling, as well as spending time with his children and grandchildren. He was an avid fan of the Wisconsin Badgers, Milwaukee Brewers, and also loved to watch the Packers. Burnell was an active member of St. Bridget's parish and was a 4th degree member of the Ridgeway/Barneveld Knights of Columbus. Burnell is survived by his four children, Liz (Denny) Loy of McFarland, Jim McDermott of Georgetown, KY, Mary Kay Vogel, Deb (Keith) Buckingham, both of Mineral Point; 6 grandchildren; 9 great grandchildren; his brother, Frank (Marie) McDermott; two brothers-in-law, Howard Strassman and O.J.(Mary) Johnson; many other special relatives and friends. Burnell is preceded in death by his wife Ruth, parents Henry and Agnes McDermott, siblings LaVerne, Geraldine, Tootie, and Helen. A Mass of Christian Burial will be celebrated at 11:00 a.m. on Monday, March 30, 2015 at ST. BRIDGET'S CATHOLIC CHURCH in Ridgeway. Father Sanctus Ibe will officiate. Burial will be held in St. Bridget's Cemetery. Friends may call from 3:00 p.m. until 6:00 p.m. on Sunday at the GORGEN-McGINLEY & AYERS FUNERAL HOME in Dodgeville and from 10:00 a.m. until time of Mass on Monday at the church. In lieu of flowers, donations can be made in Burnell's name to St. Bridget's Catholic Church, American Cancer Society, or Upland Hills Hospice.

Ridgeway - Burnell Ambrose McDermott, age 95, of Ridgeway, passed away on Thursday, March 26, 2015, at Upland Hills Rehab following a brief illness. He was born May 25, 1919 in Ridgeway, the son of Henry and Agnes McDermott. He grew up on a... View Obituary & Service Information

The family of Burnell McDermott created this Life Tributes page to make it easy to share your memories.

Send flowers to the McDermott family.