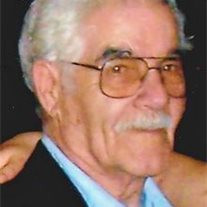 Mineral Point - Bruno "Babe" Joseph Cenite Sr., age 86, of Mineral Point, passed peacefully on June 30, 2013 at home surrounded by family. Bruno was born on April 7, 1927 to Frank and Catherine (Valenti) Cenite who were Italian immigrants. He was drafted in to WWII in 1945. He was stationed in Carlsberg, Germany and in France before returning home in 1947. Bruno was a lifetime member of the American Legion. Shortly after arriving home, he met his wife Delores JoAnn Dietzmann. The couple married on November 13, 1948. Bruno worked in construction until his retirement. After retirement, he enjoyed his trips to Dubuque. Bruno was known for his homemade sausages and wine. He also enjoyed cooking for family and friends, especially spaghetti. He was an avid gardener. Bruno was always able to make someone smile and never turned away a visitor. He enjoyed time with his grandchildren and great grandchildren. Babe will be missed dearly. Bruno is survived by five children, Connie Cenite of Janesville, Carolyn (Greg) Prohaska of Platteville, Bruno Jr. (Joe) of Dodgeville, Carl Cenite of Mineral Point, and Rose Cenite (Bill Dolan) of Dodgeville; fourteen grandchildren, Brian (Toni) Levitski, Eric Levitski, Tiffany Prohaska, Travis Prohaska, Todd Prohaska, Trevor Prohaska, Jared Cenite, Tony (Casey) Cenite, Carmen Aide, Cami (Henry) Brossenbrock, Chad (Tami) Cenite, Casey (Joan) Finley, and Correy Finley; fifteen great grandchildren, two great-great grandchildren and his sister, Rosella Logensen of Blanchardville. Bruno is preceded in death by five brothers, one sister, his parents, and grandson Craig A. Finley. A Mass of Christian Burial will be held at 11:00 a.m. on Wednesday, July 3, 2013 at Ss. MARY & PAUL CATHOLIC CHURCH in Mineral Point. Fr. Monte Robinson will officiate. Burial will be in St. Paul's Cemetery with full military rites accorded by the Mineral Point VFW and American Legion. A visitation will be held on Tuesday, July 2, 2013 from 4:00 until 7:00 p.m. at the GORGEN FUNERAL HOME in Mineral Point and on Wednesday from 10:00 a.m. until time of service at the Church. The family would like to say a special thanks to Peggy Barton, LPN. Also Patti and Amber of Upland Hills Hospice of Dodgeville.

The family of Bruno J. "Babe" Cenite created this Life Tributes page to make it easy to share your memories.