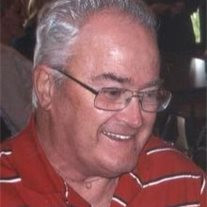 Dodgeville – Bruce I. Powers, age 69, died at his home in Dodgeville on January 3, 2013 after being paralyzed from an accident in November. His wife, Mary and their faithful dog, Maggie were by his side. Bruce was born on October 19, 1943 to Earl and Evelyn Powers in Madison and attended Madison schools while growing up. He served several years in the U.S. Army before returning to Madison. He married Lavina Mainwaring and together they raised 5 sons. On June 27, 2009, Bruce married Mary A. Knutson, of Dodgeville and together they had many fond memories of gardening in the back yard, visiting local greenhouses and enjoying friends at the local Senior Center. Bruce was well known for helping fellow members of AA and was always willing to talk to anyone in need. He was a member for over 25 years and believed in the program and how it helped others. Bruce is survived by his wife Mary Knutson; his sons Clint (Mary Jo) Mainwaring, of Rio, Clem (Shelly) Mainwaring, of Steuben, Dusty Mainwaring, of Mt. Horeb, Reed (Linda) Powers, of Poynette and Dean Powers, of Spring Green; 9 grandchildren; 2 great grandchildren. He is further survived by Mary's family, Kimberly (Howard) Haugstad and sons and Keri (Chris) Radtke and sons. Other survivors include his sister Lorella (Tom) Bidwell, his brother Brian Powers and his brothers-in-law Fritz Cox and Jon (Vicki) Cox. Bruce will be missed by friends at church and AA, the Senior Center in Dodgeville and especially by his wife and special dog, Maggie. Even at the end, Maggie kept checking on him and waited for a pat on the head along with a treat. He had a very special friend, Dan Franks that was always there for him and made many phone calls and visits to him during his last weeks that were so much appreciated. Also helping in time of need were his neighbors, Jim and Michael Zoet and Scott Carey. What would we have done without our friends and neighbors? Bruce will be cremated according to his wishes. His ashes will be spread in the back yard under the arbor where he will wait for Mary to join him. A Memorial Service will be held at 1:30 p.m. on Saturday, January 12, 2013 at the GORGEN-McGINLEY & AYERS FUNERAL HOME in Dodgeville with Pastor Leanne Rose officiating. Visitation will be held from 12:00 p.m. until time of services. "The road has been long and the journey has been hard, but what lies ahead is worth the wait."

Dodgeville &#8211; Bruce I. Powers, age 69, died at his home in Dodgeville on January 3, 2013 after being paralyzed from an accident in November. His wife, Mary and their faithful dog, Maggie were by his side. Bruce was born on October 19,... View Obituary & Service Information

The family of Bruce I. Powers created this Life Tributes page to make it easy to share your memories.

Dodgeville – Bruce I. Powers, age 69, died at his home in Dodgeville...

Send flowers to the Powers family.