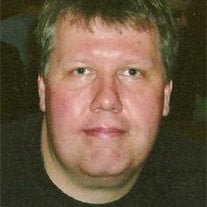 Dodgeville - Brian K. Pipkorn, age 42, of Dodgeville, died unexpectedly on Thursday, July 19, 2012 at Upland Hills Health in Dodgeville. He was born on January 4, 1970 in Marshfield, Wisconsin to Eugene and Darlene (Ledger) Pipkorn. He graduated from Loyal High School in Loyal Wisconsin in 1988 and from Southwest Tech in Fennimore Wisconsin in 1998. On July 31, 1993, Brian married Lisa Weis and they have three sons, Maxwell (11), David (9), and Alexander (7). He loved family time with his boys and wife. He couldn't get enough of them. Brian worked at Heartland Credit Union in Dodgeville, Wisconsin for 13 years as Member Financial Representative. He will be remembered for his love of sports, Packers, Brewers, movies and video games. Brian is survived by his wife, Lisa; his three sons Maxwell, David, and Alexander; his mother, Darlene Pipkorn, of Colby; his six sisters, Barb (Steve) Pankratz, of Marshfield, Dianne (Jeff) Biedel, of Colby, Cheyrl (Rolf) Johansson, of North Carolina, Gini (David) Johansson, of Granton, Laura (Steve) Kauth, of Loyal and Tammy (Kevin) Smith, of Eau Claire; many nieces, nephews other relatives and friends. He was preceded in death by his father, Eugene Pipkorn (May, 2004), his brothers John Pipkorn (November, 2005) and Andrew Pipkorn (July, 2009) and his sister-in-law, Pam Haebig (September, 2005). A Mass of Christian Burial will be celebrated at 11:00 a.m. on Monday, July 23, 2012 at ST. JOSEPH'S CATHOLIC CHURCH, 405 S. Dacotah Street, Dodgeville. Father Sanctus Ibe will officiate. Burial will be held in St. Joseph's Cemetery. Friends may call from 2:00 p.m. until 6:00 p.m. on Sunday at the GORGEN-McGINLEY & AYERS FUNERAL HOME, 400 E. Grace Street, Dodgeville and from 10:00 a.m. until 10:45 a.m. on Monday at ST. JOSEPH'S CATHOLIC CHURCH in Dodgeville. In lieu of flowers, the family suggests that memorials be made to an Education Fund set up for Brian's three children at Heartland Credit Union in Dodgeville.

The family of Brian K. Pipkorn created this Life Tributes page to make it easy to share your memories.

Send flowers to the Pipkorn family.