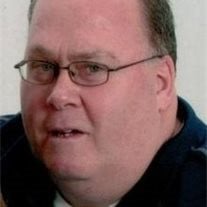 Dodgeville – Brian P. "Gonnie" Borne, age 54, of Dodgeville, passed away on Wednesday, March 16, 2016 at his home after a brief, but courageous battle with pancreatic cancer. Brian was born on March 21, 1961 to Harry and Mildred (Hanko) Borne. He married Beth Olson on November 21, 2009. He graduated from Dodgeville High School in 1979, and has been employed at Lands' End in Dodgeville since 1980. Brian met the love of his life, Beth Olson, years ago and they were married in 2009. Brian cherished Beth and their love for each other was very apparent. They always called each other "Hon." They spent many special times together, that leaves her with many wonderful memories. A limb has been broken from our family tree as we lost one of the most selfless, loving and caring people in the world. Brian was an avid golfer and participated in sports throughout his life. He was a huge sports fan and especially enjoyed watching his nieces and nephews. He loved and cherished all of them as if they were his own kids and spent many hours supporting them, no matter the activity. They truly loved him as much as he loved them. He had a special niece, Haley, who spent countless hours with he and Beth. He will never be replaced nor forgotten. Heaven has gained an Angel. Brian is survived by his wife, Beth of Dodgeville; his five brothers, Jeff (Kris), Mike (Becky), Randy (Lisa), Steve (Chris) and Bill (Angie); his five sisters, Kris Halverson, Jill (Joe) Bartman, Tracy (John) Sanders, Mary (John) Crook and Ali (Colin) Woodward, all of Dodgeville; his three brothers-in-law, Mark (Cricket) Olson, Gary Olson, Paul (Terese) Olson; his sister-in-law, Linda (Tom) Boll; many nieces, nephews, great nieces and nephews; close family friend, George Wallenkamp; other relatives and many friends. He was preceded in death by his parents, Harry and Mildred Borne, his sister, Vicki Borne, his mother-in-law, Donna Olson and his niece, Mackenzie Reynolds. A Public Visitation will be held from 4:00 p.m. until 8:00 p.m. on Saturday, March 19, 2016 at the GORGEN-McGINLEY & AYERS FUNERAL HOME in Dodgeville. A Private Family Service will be held on Sunday. In lieu of flowers, the family requests that memorials be made to family for future memorials to be given by Gonnie's family. "Time for me to fly, Oh, I've go to set myself free and that's just how it's got to be. I know it hurts to say goodbye, but it's time for me to fly."

Dodgeville &#8211; Brian P. "Gonnie" Borne, age 54, of Dodgeville, passed away on Wednesday, March 16, 2016 at his home after a brief, but courageous battle with pancreatic cancer. Brian was born on March 21, 1961 to Harry and Mildred (Hanko)... View Obituary & Service Information

The family of Brian P. "Gonnie" Borne created this Life Tributes page to make it easy to share your memories.